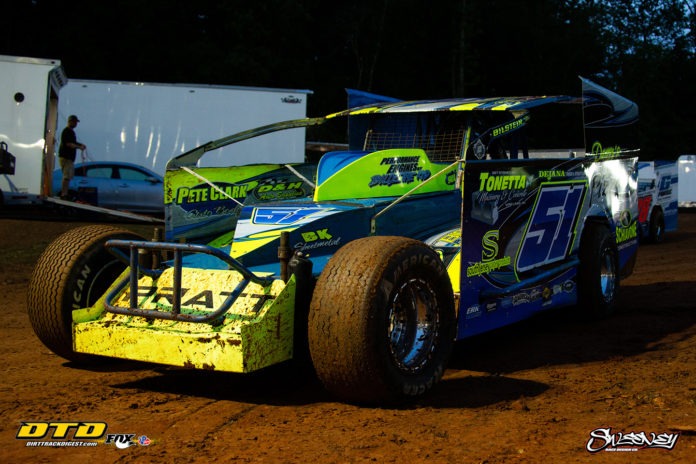 Richie Pratt Jr., found himself stuck on top of Erick Rudolph early in the Thursday night feature for the Short Track Super Series ‘Return to Racing.’   He was just in the wrong place at the wrong time when Stewart Friesen spun receiving the worst end of the damage.

Friday night it was close to happening again, the difference, Pratt just slipped by the incident allowing him to inherit the lead.  As the top four cars were taken out in the crash, Pratt scooted to the bottom and around them all.

“Last night, everybody saw it, Stewy just lost it,” commented Pratt.  “It happens to the best of them.  It caused a big pile-up that we were in the middle of.  Tonight, there where was a mess and I was in the right spot to miss it.   Tonight was my night, last night wasn’t.  We’ll take it.  We needed it as a team.  We are thrilled to death.”

The team had some significant damage to fix on Friday morning as the entire front end, radius rods and the bottom all needed to be repaired while attempting to dodge the raindrops.  It took the team nearly all day to get the car back together.

Pratt admitted he isn’t known as a little track guy.  That made the win a surprise even to him.

“For me, I’m an old Bridgeport guy I guess you’d say now, the big five-eighths mile,” joked Pratt.  “I run half-miles at Georgetown and Delmar, I’m a big track guy.  These little quarter-miles ain’t my thing.  I’m shocked to win here.  I would have been happy with a top five.  To win… it’s great.”

The Short Track Super Series ‘Return to Racing’ continues on Saturday night at Cherokee Speedway.  Hot laps are at 7 p.m. with racing beginning at 7:30 p.m. on www.dirttrackdigest.tv.