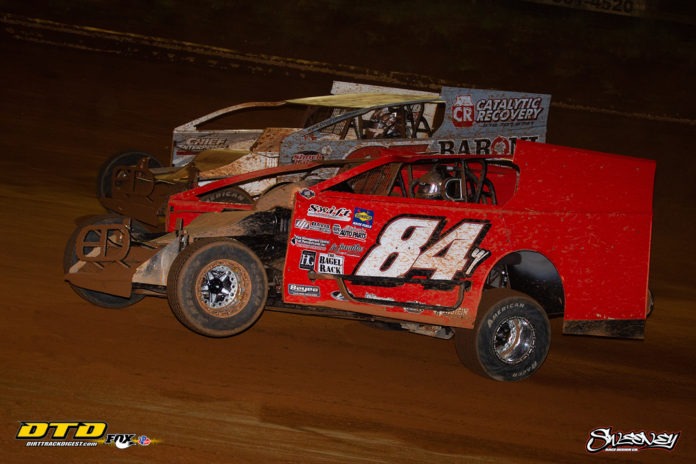 Alex Yankowski might be only 15-years-old, but on Friday night the Pennsylvania driver looked like a veteran as he swapped positions with them in the 50-lap finale at the Tri-County Racetrack in North Carolina.

Yankowski started from the 21st position and by the time it was all over he finished in the runner-up position.

“Last night I thought we were pretty good, we just had a timing issue with the motor,” commented Yankowski. “That really killed us. We got that fixed up this morning. We were pretty confident for the heat race. We drew pretty bad, but we knew we were fast. Everything just fell our way with the wrecks in the feature. It wasn’t the hardest race because some guys got taken out, but that is part of racing.”

At one point, Yankowski had an intense battle with Danny Johnson. Johnson made the youngster work hard for the position. Eventually Yankowski proved to be too much.

“He’s a great competitor,” said Yankowski of Johnson. “I remember two years ago I was watching the highlights and thinking these were my idols. A guy like the Doctor, it’s just awesome. It’s crazy.”

Yankowski had one last shot at a win with a late race restart, Richie Pratt Jr., ended up being just a bit better on the one lap dash to the checkered.

“He was better on short runs,” stated Yankowski. “I think if we had a long run we may have had something. It didn’t go that way tonight, but that’s alright we’ll move on to Cherokee tomorrow.”

Only one driver did not return on Friday night and that was Jeremy Smith. Smith opted out of the seat allowing Billy Decker to take the controls after Decker’s No. 91 had motor issues on Thursday night. Decker made the most of it finishing sixth in the feature.

A puff of smoke came out of Billy Van Pelt’s car in the heat race. He slowed and stopped in turn four. He was done for the night.

Peter Britten’s tough luck continued on Friday. Britten was involved or close to being involved in every incident on the track in the feature. He managed to survive and salvage an 11th place finish.

Larry Wight debuted a new Teo Pro Car. Unfortunately, the new car sustained heavy damage in the feature when several cars got crossed up in front of him. Wight got over on his side mangling the body. He was able to continue, but with significant damage.

Billy Pauch Jr., looked like he had a strong run going until issues with the radiator forced him to withdraw early.

Matt Sheppard had another dismal night. Sheppard advanced from twelfth up to third before being involved in a wreck that took out the top four. He was unable to continue finishing in 22nd.

Andy Bachetti was sitting inside the top three when he pulled off the track with apparent brake issues.

The Short Track Super Series ‘Return to Racing’ continues on Saturday night at Cherokee Speedway. Hot laps are at 7 p.m. with racing beginning at 7:30 p.m. on www.dirttrackdigest.tv.