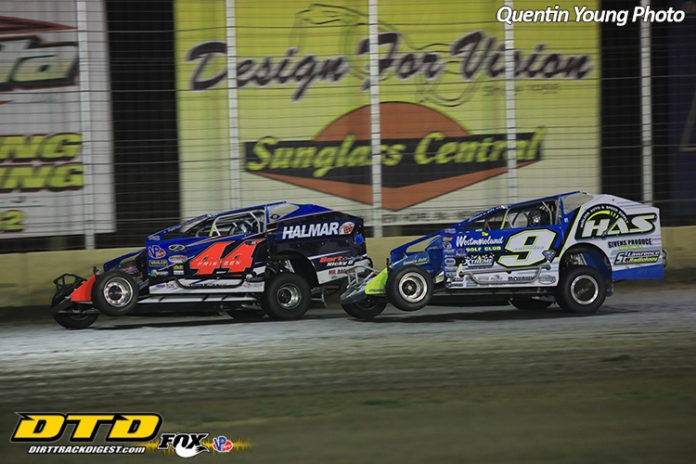 Friesen has finished inside the top 10 in nearly ever race he’s competed in with the dirt Modified while winning almost half of those events.  For most, this season is lost due to the COVID-19 crisis, but for Friesen, he just keeps winning.

It was more of the same on Wednesday night at the Bridgeport Motorsports Park as he chalked up win 17 on the season with his Bicknell No. 44.  This time he got it done in the King of the Big Blocks Super DIRTcar Series 100-lap event.  This coming of the heels of a win on Monday night at the Five Mile Point Speedway in the Mike Colsten Remembered 51.

“We got some good momentum,” said Friesen.  “We got a lucky break there when Matt (Sheppard) slipped by.  I was pretty much dead in the water at that point.   He slipped by and then broke.  We had some luck on our side.  We’ll take it.”


After the win, Friesen was quick to mention former Bridgeport General Manager Danny Serrano.  Serrano was a friend to many in the sport and one of the biggest supporters of Bridgeport Speedway and racing in general.  He passed away unexpectedly a few months ago.

“This one is for Danny Serrano,” stated Friesen.  “He was a great friend.  We were sad to see him go.  He was great for racing in this part of the woods.  His heart and soul was Bridgeport.  I’m glad we could come down here and get a win for him.  It means a lot.  I have a couple pictures of wins with him on the big track.  To come down the first time to this place is unbelievable to get a win.”

Friesen’s car was strong from the get-go.  He quickly moved up through the field before challenging Larry Wight and Ryan Godown for the lead.  All it took was a restart and he had the top spot after taking over third a few laps prior.

“It fired off awesome,” he said.  “We were able to pick our way to the front.  A couple slide jobs, you felt it getting abrasive and laying rubber down, but it was wide.  It was on the bottom, the middle.  Then we restarted third there and fired off.  We were able to get Godown and slide Larry.  It felt pretty good.  We just kept rolling with it.”

As mentioned, Friesen had some luck on his side.  Matt Sheppard rocketed by him on lap 88 only to come up lame in the next corner.  There was nothing, at that point, that Friesen could do to keep Sheppard behind him.

“I saw Sheppard under me, everyone is taking pictures,” mentioned Friesen.  “I was just trying to hang on.  I couldn’t get across that bump in turn two really good.  I was trying to protect the bottom and he got around the top.  He pounded through that bump and broke.  I would rather be lucky than good sometimes.  We able to hold off Decker.  It was a good night.”

The Decker he is referring to is Billy Decker.  Decker got an early flat and raced all the way back to second.  He nearly snuck by Friesen on the final lap at the checkered flag.

“I saw that he had a flat early,” commented Friesen.  “Then listening on the one way, I knew he had come back up through.  I was just hoping that their stuff was worn out as mine us when they got back up to me.”

The aforementioned Decker started the race from the front row and led four laps from lap 20 to 24 before having a flat tire.  After pitting, Decker was able to race his way back up through the field to give Friesen a run for his money on the final lap.  Decker wasn’t sure what happened to give him the early race flat as the tire wasn’t worn through.  He also had a throttle issue for a handful of laps.

“I don’t know what happened there,” cited Decker.  “The tire wasn’t worn out.  I was getting around pretty strait.  I think we were balanced better because we had the stagger right with that set.  As soon as we pitted, honestly not that it was going to change the outcome or anything, but I had a pebble stuck under my gas pedal.  I went eight or 10 laps riding around the bottom at half throttle.  That didn’t matter.  I don’t think it had an impact on the race, but it stumbled us a little bit there.  All and all, it was a good night.”

Decker felt like after the race had he made another decision in the final corner things could have played out differently.  He elected to go low off of turn four instead of riding around Friesen and the slower car of Ryan Watt on the top.

“I almost think if I picked the other lane to get around him I had a better shot,” said Decker.  “Hindsight is always 20/20.  Ryan (watt) was struggling a little bit tonight.  He was struggling a bit tonight after trouble with his primary car.  He’s always really good.  He kind of got in the way there and Stewart went to the bottom.  I was committed right there.  If I took the top I think I could have made it a little closer.”

It was a struggle out of the box for Jimmy Phelps to adjust to the new Bridgeport.  When asked what it raced like he simply joked and said, “the new Bridgeport.”  It took some time for him to figure out the right line, but once he did he was able to move up and score a solid third.

“I chased myself all night,” mentioned Phelps.  “We really didn’t change a lot on the car.  I just kept working on my line.  At the drop of the green in the feature I thought we were pretty good.”

Like everyone else, Phelps was happy to be back behind the wheel at a Super DIRTcar Series event.  Unlike the two drivers in front of him, Phelps hasn’t had much chance to race in 2020.  The team traditionally runs Hoosier events and there haven’t been a ton of those on the docket to date this season.  He hopes this isn’t the last chance he gets to run a 100 lap race.

“The discouraging part is the unknown right now,” commented Phelps.  “There is nothing to look forward to and that sucks in this world.  We just have to hope something gives.  Hats off to Bridgeport for doing this.  We finally got to do something.  Chasing the DIRT (car) deal limits us on going traveling and doing some of the other stuff.  We are okay with that, but unfortunately being the first series race, this is the first shot at a real race.  I’m happy it turned out alright.”

Josh Delea’s night ended before it started.  Delea caught the turn one wall and flipped several times in hot laps.  He was done for the night…

Watt got hard into the wall in turn four during his heat race.  He stated that his arm restraints got caught in the car and he couldn’t turn…

Sheppard broke an axle after taking the lead…

Wight’s night ended after he succumbed to driveline issues.