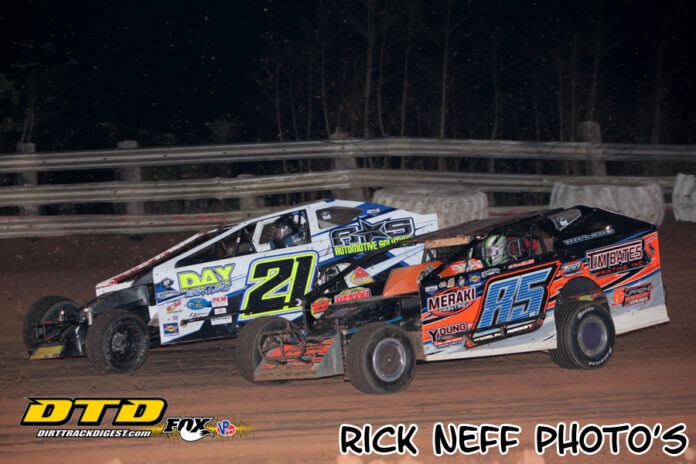 While on his first trip to Louisiana for the Cajun Swing for the Short Track Super Series, Brett Deyo announced at Ark-La-Tex Speedway on Wednesday night the formation of the Cajun Region, adding to his North and South Regions for the series.

Deyo spoke with Dirt Track Digest exclusively on Sunday afternoon after his swing through the Pelican State about his decision to add another region to the series.

“It’s growing there,” commented Deyo of the Modified division in Louisiana.  “It’s obvious that when DTD was there in May it was 13 cars and now this last trip it was up to 24 to 25.  There is a market for it down there.”

Deyo was referring to the first swing by the Northeast Modified division through the region back in May when things were just reopening from the COVID-19 shutdown.  Three nights of racing featured 15 different drivers taking part, including a handful of locals.  This time the locals were backbone of the trip with over 12 cars per night joining the Northeast contingent.

Deyo’s focus is to bring much needed support to the division in the area.  He has the ability to obtain sponsorship and contingency awards for the series in the region as well as providing rules and possibly a point fund.  They need to be organized and he feels he can assist in that.

“We have a lot of deal with contingency sponsors that we can bring to the table like American Racer, Behrent’s, Wilwood and a whole list of people,” mentioned Deyo.  “What we would like to do is get more organization for the group.  Get them a set a rules they can work from, bring some contingency awards and if we do an agreement American Racer we can do a point fund as well.  That is what we are trying to do.”

Deyo also hopes to help the class grow in the region.  He’ll have a solid group of people that will assist in running the events at the speedway while he provides assistance from his Delaware home base.  He’ll be able to get them more structure and stability than their current situation.

“We want to strengthen the class and get it to grow,” said Deyo.  “I’m obviously not going to be here, but we have a group that is going to run it.  I think having our name on it is going to help the class grow and get some more local drivers interested.  That’s what they want.  They want a schedule, want to know if there is a point fund, and make a deal with the tracks on a sliding scale deal based on car counts so they at least know what they are racing for.

“We want to put some structure to it.  Hopefully we will get to check in on them once or twice a year or do something like we did this year at the end of the year where we put the two series together.  It’s just a way to bring the Modifieds national.”

One final piece to the puzzle that Deyo is offering to the teams in the region is a social media program.  Right now, the division in the Louisiana has a minimal presence.  Deyo is looking to improve that while bringing Modifieds to the forefront.

“We’ve got a good social media program right now,” stated Deyo.  “I think ours it right there with any of the national series.  We are going to bring that to them.  We need a Facebook page and a Twitter and we’ll get them a website or at least a page on our site.  Those are things they are missing and that we can bring to the table.  That’s what this division needs, we need to make stars out of their drivers.”

As for this trip to Louisiana, Deyo and company had a blast.  The officials at Ark-La-Tex Speedway and Chatham Speedway were more than welcoming.  The drivers were also pleased with the strong payout for the Modified division.

“I loved every minute of being in Louisiana,” stated Deyo.  “The people are super nice and the tracks are cool.  It’s a different clay.  It doesn’t take near the water that it does at home to make them good at night.  Everybody was really welcoming.  The local drivers appreciated the payout.  They’ve never raced for anything like that before.  Basically, if they showed up for all three features, they made $1,300.  That is huge.”

Deyo was already seeing relationships forming as local teams were working with the Northeast teams to elevate their programs.  The drivers befriended each other, which should only make the region stronger moving forward.

“They want the class to grow, want structure and they enjoyed racing with the other guys,” commented Deyo about the local teams.  “They were making friends with the Northern guys.  They are starting to straighten their cars out.  They don’t know.  We are lucky, we have all the resources up North.  We have the chassis builders, got all these people, I think it is a good marriage.  I think we would had five or six more cars if it wasn’t for all the restrictions, but it’s one of these deals that our deal has been to race and we raced.  We decided to go forward and we did.”

Matt Sheppard swept the four night’s of action in Louisiana claiming $29,000 while winning three feature events including the Mods in the Marsh 75 at the Chatham Speedway worth $20,000.