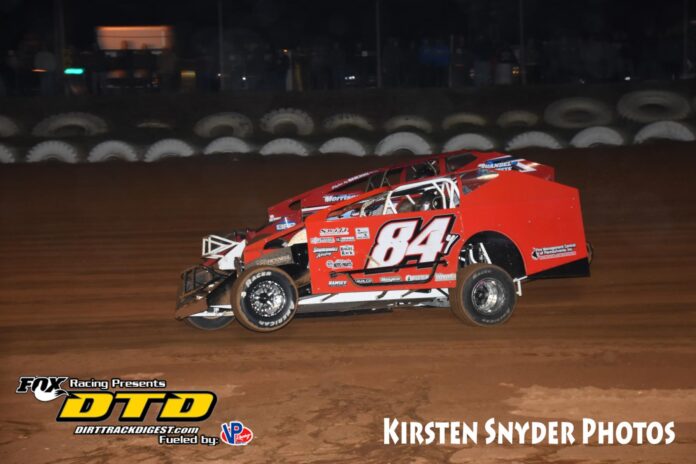 It’s safe to say the future of the sport is looking brighter than ever, especially in the weekly Modified division at the Big Diamond Speedway.  In a field filled with grizzled veterans, two of the next generation stars were able to wrangle the second and third positions in the finishing order behind eventual winner Tim Buckwalter.

Teenager Alex Yankowski grabbed the second spot early in the 25-lap feature and would go on to hold the position throughout while Ryan Krachun finished third after a terrific battle with Duane Howard.

Yankowski went off from the inside of the second row by virtue of the redraw on a very challenging track.  Mother nature was not kind on the night as a persistent mist made it difficult for both the track crew and the drivers.  The show went on and Yankowski was able to take advantage of his starting spot to get a solid finish behind Buckwalter.

“I think he showed it last year before he got hurt, he definitely has a lot speed with the 23 car,” Yankowski said of Buckwalter.  “We were fortunate, we started seventh in the heat and got up to third to get in the redraw.  I think that was the key for the night.  If we weren’t in the redraw and then a good draw, we wouldn’t be in tech.  To come out of here with second is good.”

It wasn’t easy run by any means for the Covington Township, Pa., driver as he dealt with equipment problems during the race.  As the laps clicked off his visor came loose.

“I had a screw coming out of my visor,” mentioned Yankowski.  “I ran last half of the race with my visor up.”

Like Yankowski, it ended up being a pretty good night for Neshanic Station, N.J., pilot Krachun.  Krachun started alongside Yankowski in the second row, but his race to the podium was much more challenging.  Krachun had some hiccups early causing him to drop back outside the top five.

He eventually got his No. 29 Morgantini powered Bicknell rolling and made his way past several drivers to get back up front at the checkered flag.

“I’m happy with third, we started fourth, but faded early,” commented Krachun.  “It was still a little wet on that initial start and when I took off on the outside, I pushed right up the race track.  I lost a couple spots there and then hit the holes and lost a few more spots.  Luckily, I was able learn from that and race the track.  The car was really good.”

For Krachun, it was a good opening night as he’ll be calling Big Diamond his home once again after taking a few years away from the Coal Country oval.

“I hope we have a good year here,” he said.  “I’m glad to be back.  We took a little bit of a hiatus from Diamond.  It’s definitely my home on Friday nights.”