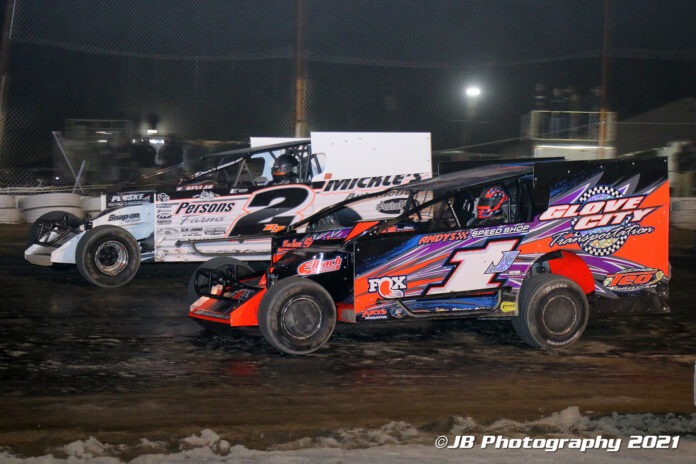 Rocky Warner was the 2019 Modified champion at the Fonda Speedway.  He was dominate that season in wining numerous features while on his way to the title.

The 2020 wasn’t as kind to the ‘Flying Squirrel.’  He went winless, like everyone else not named Jeff Heotzler or Stewart Friesen.

Saturday night Warner got back to his winning ways leading the entire 40-lap feature for the $12,000 paycheck, but more importantly a trip back to victory lane for car owner Jake Spraker while honoring Jack Johnson.

“To honor Jack (Johnson) is a cool deal,” commented Warner.  “That kind of money is awesome no matter what.  This has a lot of meaning.  Jack is a legend here.  We have been pitting in his parking spot every week.  We gave it up tonight for Ronnie in honor of his father.  It’s just a really cool deal.”

Warner has had his struggles, but beating Friesen has been a tall order for everyone in the pit area.  The team made some adjustments on their Pro Power powered Teo this week to get better in hopes of giving Friesen a run for his money when he returns to Fonda Speedway.

“When Stew’s not around it leaves it a little more open for us,” mentioned Warner.  “Stew’s been the guy to beat and he still is.  We got some homework to do to keep up with him.  We made some adjustments this week.  Last week our car didn’t run, it wouldn’t run in the corners.  Jake was a little bummed out.  We called the engine and the carburetor guy and got some new parts on the car and woke the thing up.”

The only real threat to Warner’s win Saturday night came in traffic. Warner got hung in the outside line for several laps which slowed up his progress allowing Ronnie Johnson to close.  He knew it wasn’t the line he needed to be running.  Late in the race he hit traffic again with everyone giving way once they saw the No. 1J alongside.

“I talk to myself in the car a lot,” said Warner.  “I was telling myself to calm down and at least get beside the guy so you don’t get passed.  Usually, once the lapped cars see you and if you show them the nose, they give you room.  There was a lot of respect by fellow drivers out there tonight.”

One week after honoring his dad with a pre-race ceremony, Ronnie Johnson returned to the place he called home for several years on Saturday nights.  After his second-place finish, Johnson reflected on the ceremony the week before.

“Last week, with the event that was here, it was such an honor to come here and represent my dad, my whole race team and my family,” said Johnson.  “It was a little emotional.  As I look back at it a week later, it was really cool.  It was a touching night.”

As was the case in days gone by, the crowd reacted with cheers when Johnson got within striking distance of race leader Warner.  It was obvious he’s still holds a special place with the fans at Fonda Speedway.

“I’m proud of it,” stated Johnson.  “It is something that my dad created and somehow we maintained it over the years.  I’m real grateful for that.  I love all the fans and I’m grateful for everyone here at Fonda.”

Saturday night Johnson utilized a big-block powerplant in his No. 2RJ.  He struggled a bit with the handling as the car proved to be just too tight to give Warner a run for his money.

“My car was awfully tight and was pushing so I had to use the brakes a lot to turn,” cited Johnson.  “To run the top here you don’t want to use the brakes, you have to be able to roll.  When we had that restart, I thought I could have rolled him a little, but I pushed at the other end and I had to lift.  I checked up a little bit and he got away from me.  I knew enough at that point to get back in line.”

Hanson’s Focus Pays Off with a Third

Craig Hanson made some adjustments to his program during the off-season.  The 36-year-old pilot elected to downsize his racing team from two cars to one.  That decision was made in order to put more emphasis on the team’s primary ride.

“I got so much going on with work and everything that it’s just hard to get two cars done,” said Hanson.  “The last few years we’ve had two cars, but I can’t race two nights a week every week.  Basically, the other car would sit there.  We ran the series (Short Track Super Series) with the Saturday night car and the other car was there if something happened.  I said that’s enough.  We sold that and freshened up everything we could on this one.”

Hanson has struggled to get his car to handle the way he wants it to.  Whether it’s with windows or sail panels, the car is just tight.  The issue improved Saturday, but it still needs some more changes.

“The car was a little tight,” commented Hanson.  “We tried something in the feature and it seemed to be pretty good.  Actually, I got aggravated and threw some things at it.  They dropped the green and it shoved the nose a little bit.  It wanted to shove still.  I decide to drive it harder.  We were either going to go in the wall or it was going to turn.  It turned.”