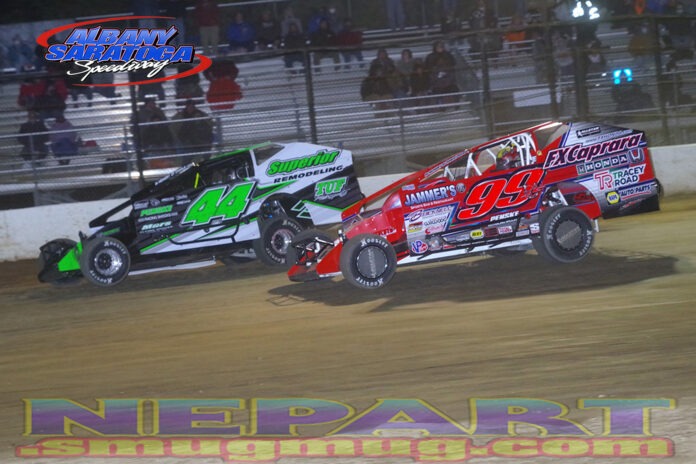 Modified racing has undergone a technological switch over the past handful of seasons.  Nearly everyone has switched their cars from the traditional torsion bar suspension system to the now much talked about coil system.

Keith Flach was wary of the new combination.  He decided to wait it out and continue to run his torsion bar system.  Unfortunately, that proved to be the wrong decision for the Ravena, N.Y., driver.  The team finally made the switch last season and they are now trying to play catch-up.

They got a glimmer of hope on Friday night at Albany-Saratoga Speedway as Flach and company won the night’s 35-lap Modified feature for his first of the 2020 season.

“We have been struggling quite a bit with this coil stuff,” commented Flach.  “We didn’t switch over until last year.  We were going with bars still.  We’ve been trying to learn a lot in a short amount of time.  We’ve been talking with Randy (Williamson) at Bicknell.  Andrew and my dad have been working tirelessly in the shop learning the spring smasher and all that stuff.  It’s all new to us.” 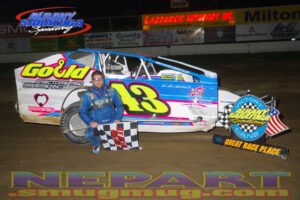 Each week is proving to be a test session for the team.  Some weeks they hit on something, others they are left scratching their heads.  They are looking for consistency to run at the front on a more regular basis.

“We are definitely trying to do a lot in a short period of time,” said Flach.  “We made a lot of changes from last week.  We felt like we weren’t that good.  We made some changes for tonight.  I was little bit better.  Starting up toward the front always helps.  We definitely made a lot of progress on the car with the setup.  Hopefully we can keep on top of it and keep trying to adjust.

Friday night’s battle for the lead started with Flach passing Elmo Reckner.  It took multiple attempts to secure the top spot as each time Flach challenged Reckner it seemed like the caution flag came out.

“Inopportune moments for the yellow for sure,” stated Flach.  “He was running good on the bottom to middle there.  We had a couple good runs and it seemed like the yellow would come out.  On that last restart I think there was confusion about who was leading at the time.  I think he thought I was and I thought he was.  We were able to get the lead on that.”

At the conclusion of the feature, Flach was tracked down Anthony Perrego.  Perrego got close, but he was unable to make a move on him for the lead.

“Toward the end I got a little nervous because Anthony is a good runner,” mentioned Flach.  “He’s got his act together.  He’s been on this stuff a long time.  We were very fortunate we got a good run on the restart and I could hold him off.  I only do so much, a lot of this goes to the guys.  They are doing the hard work in the shop.”

Anthony Perrego started 14th on the grid for the start of Friday night’s feature.  Perrego did all he could to steal the win away from Flach, but he just came up a bit short finishing second.  He was really strong in the opening laps quickly finding his way to the front.  Flach just ended up being a tad better at the end.

“Keith was just really good,” cited Perrego.  “His car was more maneuverable than mine.  Early on I was really good then the track started to break apart on the outside and I just got way too tight.  All-in-all, it was a good night.  I actually thought we had a car to win.”

Prior to trying to take a shot at Flach for the win, Perrego had to deal with a relentless challenge from Larry Wight.  Wight was all over him for about a 10 lap stretch midway through the race before Perrego was able to put some distance between them.

“That was fun out there,” commented Perrego.  “We had a good battle there with Larry for about 10 laps before things evented out.”

Wight Getting Some Seat Time

Larry Wight felt like the team needed some work to get most consistency with the car.  They haven’t been able to streak together quality starts.  The team was just missing something.  With Brewerton Speedway cancelled due to rain, Wight headed to Albany-Saratoga Speedway.  It paid off with a podium finish.

“We’ve just been so hot and cold with the big-block that we had to get on a big-block track, with Hoosiers, and on a DIRTcar sanctioned track just so we could compare apples to apples,” said Wight.  “We’ve been running some of the American Racer stuff, but it’s hard to translate because what works with one tire doesn’t work with the other tire.  I think we were spinning ourselves out a little bit.  We came down here to take advantage of getting some laps.  We have a couple of big races here.”

Wight felt like he was still missing a small piece to the puzzle late in the feature event.  Steps were taken in the right direction.

“We were lacking a little bit of drive off the corner once the track started to go away,” cited Wight.  “The way we’ve been running, it was a plus to come here.  We think we got back to where we were at the beginning of the year last year and hopefully, we can build off of that.”

Wight also spoke of the battle with Perrego and how much fun that was.

“Any time I can run with Anthony it’s always great,” stated Wight.  “We’ve got a lot of respect for each other so we can usually put on a good race and not even touch.”