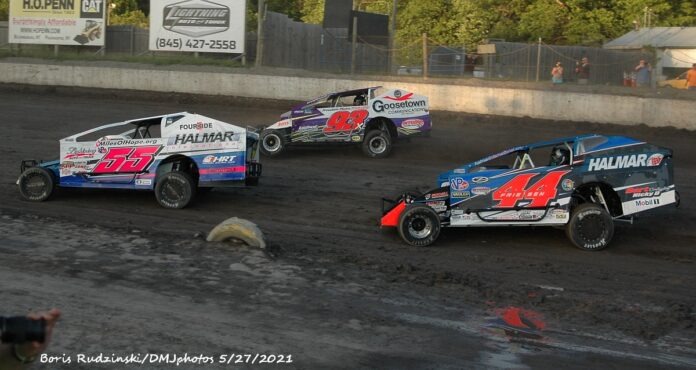 Stewart Friesen has dominated the 2021 season in the Modified ranks, but there was one thing missing from his checklist coming into Thursday night’s event at the Orange County Fair Speedway. Friesen had yet to take a win at the ‘Legendary House of Power’ to secure his spot in the final chase for the 2021 title at the facility.

On two different occasions this season the Sprakers, N.Y., driver has come up short. First in the opening round to Tommy Meier before being bested by Matt Sheppard in round two.

After Thursday night, the wait is over. Friesen was untouchable in the 75-lap affair leading every lap while earning $6,000 and more importantly, a spot in the final eight for a shot at the $25,000 championship.

“It’s big,” commented Friesen. “This championship here would be really cool. Obviously, we can’t do all the regular shows, but to be locked in for the end is good. We got a good notebook and a good race car. Hopefully we’ll keep it rolling.”

Friesen’s night started with a win in the 25-lap qualifier where he earned the pole while taking another $1,000 in prize money. It was a win that nearly wasn’t as Friesen almost looped it in the opening laps before regrouping and using the top of the speedway to drive around Max McLaughlin for the win.

“I wanted to get above the cushion and the door dug in and it almost went around,” said Friesen. “I figured I’d get on it after that, but I kind of found a lane there by accident. It was a little smoother than running the chop on the bottom. It worked out.”

Having the pole position to start the race was key to Friesen in his win as the controlled the pace throughout.

“Track position was key when it got super slick, not to a cushion, but that ring on the top,” cited Friesen. “It was definitely good to be up front in clean air.”

Other than the qualifier mishap, Friesen’s only other challenge came in the final 10 laps when Matt Sheppard moved into second. A handful of cautions slowed the action giving Sheppard multiple opportunities to try and steal the win.

“I was restarting on the bottom with Dillon (Steuer) then it started getting so slick,” mentioned Friesen. “I moved up and just tried to make it like a Sprint Car start. I ripped on the wall to get some momentum going into turn one. It seemed to work. I wasn’t sure. Sheppard had the opportunity to throw a fast one if he wanted to, but it worked out.”

Friesen credited his team for all their hard work in getting the car ready for action as they’ve been road warriors as of late.

“We’ve been rolling,” he said. “Thanks to Halmar and all my guys in the shop. It’s been a lot with Jess racing and I’ve been gone. It’s definitely a big team effort when it gets busy like this.”