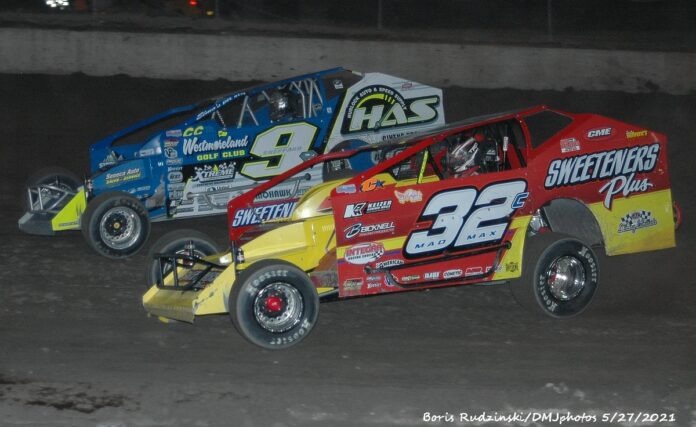 Matt Sheppard didn’t get his second win of the season on Thursday night at the Orange County Fair Speedway, but he proved to be the best of the rest behind race winner Stewart Friesen.

Sheppard ran within the top five throughout the entire race before a restart on lap 65 where he bolted into second.  He chased Friesen over the final 10 laps while being given multiple opportunities on restarts to take a shot at him.  He just didn’t have enough to make the pass for the victory with his No. 9s Bicknell.

“We were just too slow the first half of the race,” stated Sheppard.  “We finally got rolling at the end.  I really thought the last five laps we were just as good as he was.  It was just a matter of, it got so dusty going into one following him that it got tough to see where we were going, but I could roll with him a little bit.”

A podium is good, but Sheppard always wants to win.  As of late it seems like he is seeing a lot of the back of the 44.  As someone who’s been on a roll, he understands that when things are rolling drivers like Friesen can be tough to beat.

“It’s tough right now,” he said.  “When we have a good night, he has a little better night.  It’s been the way it goes.  We had a pretty darn good car tonight.  We ran second.  A few weeks ago we lapped the field at Utica-Rome and still didn’t win.  He’s been that good this year.  You can’t take anything away from him.  I’ve been there in the past.  When things are going your way, they are going your way.  Good for them guys.”

As for the restart that moved him to second, Sheppard took advantage of a young Dillon Steuer to drive by into the position.  The youngster tried to fire on the bottom opening up the outside lane for Sheppard.

“I think Dillon’s experience got the best of him a little bit,” cited Sheppard.  “He got way down low and Stew was way up high.  Both of us took off and went into first and second.  I learned my lesson the next restart I stayed way up high next to Stew and that was a lot better.”

It doesn’t seem to matter what car Max McLaughlin drives; he’s going to be on the podium.  He picked up a podium on Tuesday night at New Egypt Speedway driving for Norm Hansell before Thursday’s third place finish with the CME Incorporated race team and Vic Coffey.

“I think it’s our seventh (podium) in a row,” commented McLaughlin.  “It’s good to be up front and third to the best two Modified drivers in the world.  I can’t complain too much, but you want to get better and win races.  I know we are capable of it.  We’ve done it.  It is a little frustrating, but I’m grateful to be here.”

McLaughlin was locked up with Sheppard for much of the race with the pair exchanging the third position behind Friesen and Steuer.  Near the end it was Sheppard getting the better of him and finishing one spot in front of his Bicknell.

“I think Matt and I were really close,” said McLaughlin.  “We were just as good as each other.  Stew was typical Stew, in a different zip code.  He has more good nights than anybody, but everyone has those nights.  We just have to hit it a little better and find a little more speed.  We aren’t far off.  We are right there.”

LJ Lombardo found his way to a fifth-place finish as they dropped of the checkered flag.  The former Orange County regular had his own battle with track stalwart Anthony Perrego.  One mistake cost him as Perrego made the pass for fourth in the final laps.

Lombardo dropped back in the opening circuits of the extra distance affair before finally finding a lane around the inside of the speedway on the restarts.

“I fell back from seventh to 11th or 12th and they gave me spot back because they were all lapped cars,” said Lombardo.  “What came to my mind is that if they are going to put me back in front of the lapped cars why not try something.  I put the car on the bottom and came off third the next restart.  I kept trying to choose the bottom when I could, just on the restarts, then I’d get to the top like everybody else and it paid off.”

Steuer was solid throughout the race running in the second spot before the lap 64 restart.  He was then forced to pit with only a couple laps left.  Steuer regrouped and drove the Zubi’s Racing No. 17z back up to seventh…

Twin 25 lap qualifying races were run with Friesen and Steuer securing victories and $1,000 checks each.