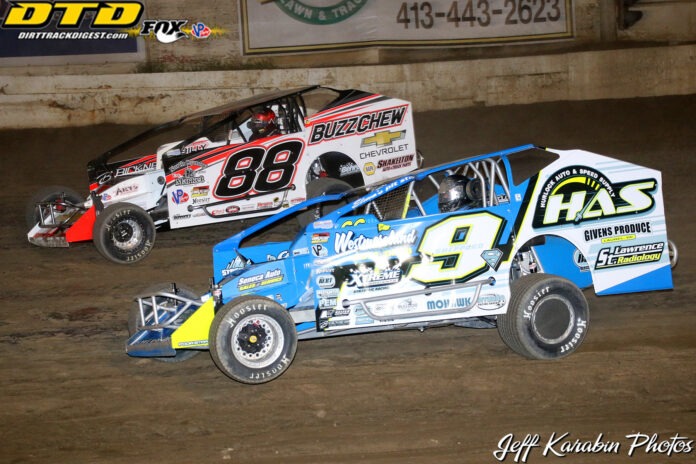 Matt Sheppard got exactly what he needed on Monday at the Lebanon Valley Speedway in the return of the Super DIRTcar Series to the high-banked oval.  Sheppard needed a win on the series, and he got it along with he $13,500 payday in the first of two Mr. Dirt Track USA events.

By his standards, Sheppard has been struggling.   A win at the Valley helps get things back on track for the former multi-time series champion.

Sheppard wasn’t all that confident coming into Lebanon Valley.  It’s a place that is notoriously difficult for invaders as it requires a completely different driving style to go along with the intense speeds.  He’s won there in the past, but winning at the Valley is much more difficult than winning at the traditional Central New York stops for the series.

“You take them any way you get them and wherever you can get them,” Sheppard said after the victory.  “We’ve been at some strange tracks where we’ve had some success in the past and also not been that great to begin with.  Then we struggled at Weedsport yesterday.  We kind of came here and we were decent out of the box.  We didn’t really mess with it all night.  We pretty much told ourselves that we don’t really know what to do with it anyway, so we’ll just leave it and see what happens.”

In typical Sheppard fashion, he redrew the worst possible pill placing him 10th in the starting order behind the likes of Mat Williamson and Stewart Friesen.  A win was going to be tough to come by, but he made it work utilizing multiple grooves on his way forward.  He eventually drove by Williamson for second then Friesen for the lead in the late stages of the 100-lap event.”

“I thought it was going to make it damn near impossible,” commented Sheppard when asked about winning from 10th.  “The track was weird tonight.  It had enough character that you could pick and choose some grooves and do some weird shit that you normally can’t do here.  I don’t know, it was working for me.”

Sheppard used the bottom of the track to get to the front before putting his No. 9s Bicknell up on the top lane for the final handful of laps.  He just felt like his car was better on shorter runs on the top of the banking. He was also having issues seeing the race track due to moisture on his visor.

“I felt like when I ran the bottom I needed tire heat,” mentioned Sheppard.  “We just had that string of cautions at the end.  I probably would have moved back down there after I got some tire heat again, but I couldn’t see it.  I just followed the wall.  It got so damp on the inside of my face-shield, it wasn’t fog, it was covered with dew.  I couldn’t see.  I was pulling tear-offs and that didn’t make a difference.  I tried to crack my shield open, but you are going so fast here it just blows it shut again.”

Sheppard hopes this win rights the ship for the team as they’ve battled with consistency all season long.  Some night’s he’s hit on something, others it’s a real struggle.   Sheppard winning at the Valley gives the team a boost.

“It certainly helps,” commented Sheppard.  “It’s been a little bit of a struggle.  I think this is seven races we’ve won.  It’s been either feast or famine.  Thankfully so far this year we haven’t been tearing anything up or breaking anything.  We just haven’t been running as consistently as good as we’d like.  To get a weird one like tonight definitely put a little pep in our step.”

When asked about what is causing his consistency issues, Sheppard felt like it’s a matter of how much the cars change from track to track.

Sheppard will now hope Monday’s win will get him closer to the consistency he’s been lacking so far in the 2021 season.

Mat Williamson finished a close second to Sheppard after winning on Monday night at the Weedsport Speedway.  Williamson was right on his bumper in the final 10 laps with traffic coming into play allowing Sheppard to keep the top spot.  He was good when he needed to be, he just came up one spot short.

“Matt was pretty good,” cited Williamson.  “I don’t know if I could have passed him. I certainly caught him.  We had a good car tonight.  We worked really hard on being good at this place.  The race had it’s ups and downs.  On the restarts I kept getting run up in the shit pretty much every time and I had to battle back.  Then Stewy blew up.  I was covered in oil and I couldn’t see. I ran out of tear-offs.  It was a very interesting race.”

Williamson made it a point to run Lebanon Valley in the opening weeks in an effort to get better.  As mentioned, Lebanon Valley is a completely different animal than the other tracks on tour.

“It made us pretty good, we were good here before,” stated Williamson.  “We unloaded okay.  I felt like before I was scared to run the top.  We came here to run here every week to get rid of the fear of running here.  All-in-all a good weekend for us.”

It seems as if Williamson returned to the form that propelled him to the 2019 Super DIRTcar Series title.  They had been lacking a bit coming into this weekend, now all seems right with the world.

“We were really good there in 2019,” said Williamson.  “I felt like if we didn’t start backing it up it we would be a one-time wonder deal and you never want to be that.”

Johnson the Best of the Regulars

Marc Johnson, competing in only his second Mr. Dirt Track USA, rounded out the podium Monday.  Johnson was consistent throughout hanging around top five for the entire 100-laps after starting sixth.  He was the best of the weekly Valley campaigners.

“We’ve had a good car here all year,” said Johnson.  “I just kept plugging away there, filling the hole when I got the opportunity.  It’s nice to represent.  I’m glad to be here on the frontstretch.  I think we have more to show.  Hopefully it’ll show in the coming weeks.”

Like Sheppard and Williamson, Johnson struggled being able to see late in the race.

“I’m kind of embarrassed to say, but my shield kept fogging up to the point to where I had to run it a quarter open,” stated Johnson.  “I kept wiping and this isn’t the place to be doing that.”