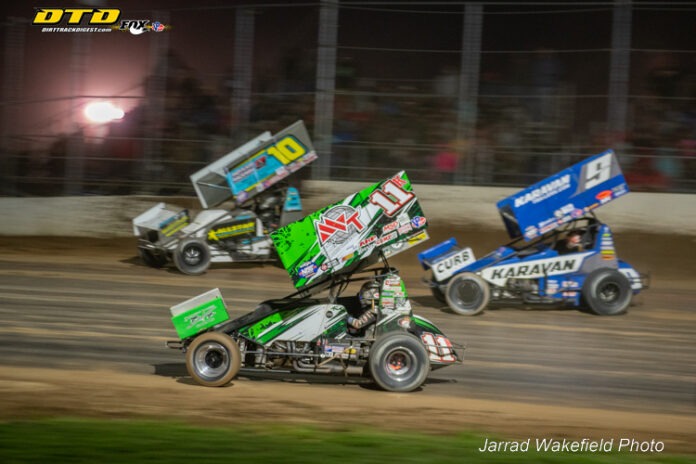 After two quality finishes, it’s safe to say that Kraig Kinser is a fan of racing in New York.

The Indiana driver finished on the podium Friday night at Ransomville Speedway before coming out of Weedsport Speedway on Saturday with a hard fought seventh place effort.

In the finale he started from the 13th position while making constant improvements throughout the feature to finish just outside the top five.

“Not too bad,” Kinser said afterwards.  “It was a decent weekend.  A third and a seventh tonight.  We’ll take it.  We went out dead last in qualifying and had to start in the back of the heat race.  We made some progress there, that got us another row.

“We made some progress in the feature when it got really slick.  That’s all we can ask for.  I don’t know if we were quite to the point to run with the guys up front.  It might have been a different story had we started up there with them.”

Kinser indicated the team is still working to find the feel that he’s been looking for in order to gain more consistency.  He’s going to walk out of this trip looking at the positives.

“We’ve been struggling car wise, pretty much the whole package, me from the top to bottom,” mentioned Kinser.  “We are just a little bit missing out.  We are starting to head that way.  We still got aspects of our race program we can work on.  A good weekend like this is great going into to some good races.

“We are going to I-55 then Knoxville.  We are halfway through big races here.  Maybe we’ll catch some good momentum heading to Knoxville.  That could be great.  We’ll take all the positives, go forward and keep rolling.”

Gravel and Sweet Adapt to Weedsport

David Gravel and Brad Sweet finished one two in the A-Main.  Both drivers have adapted to the Weedsport Speedway over the years with Gravel breaking through for the win on Saturday night.  Each driver had their own thoughts on Weedsport.

“It’s so unique,” stated Gravel.  “From the start of turn one to turn four you are always turning.  It’s really slick.  If you spin the tires off of two you spin for a long time.  It’s a unique place.  I feel like over the years they’ve made the track better.  They got a handle on it.  They can get it slick and kind of have a top and a little bit of a bottom.  I think they’ve done well with the track.”

Like Gravel, Sweet has made several starts at Weedsport. He’s adjusted well to it, but he knew going into the feature that one mistake could cost positions.

“For someone that hasn’t been here, the shape of it, but once you’ve been here a few times it’s not so bad,” said Sweet.  “I think they had the top groove.  There was some grip out there.  You just had to search for it.  I was able to get my car rolling pretty good at times.  It’s easy to make mistakes and lose time when it’s that slick.  The lapped really show your weak spots.  Our car was good through it all.”

Logan Schuchart was fast timer on the night with a lap of 13.582.  Wayne Johnson, Sweet and Donny Schatz captured heat race victories before Joe Kata won the B-Main…

Preston brought out the caution in his heat race after getting over the cushion in turn three causing him to hit the wall.  He did severe damage to the front of his No. 22.  He returned to qualify through the B-Main…

The win for Gravel was his seventh of the season.