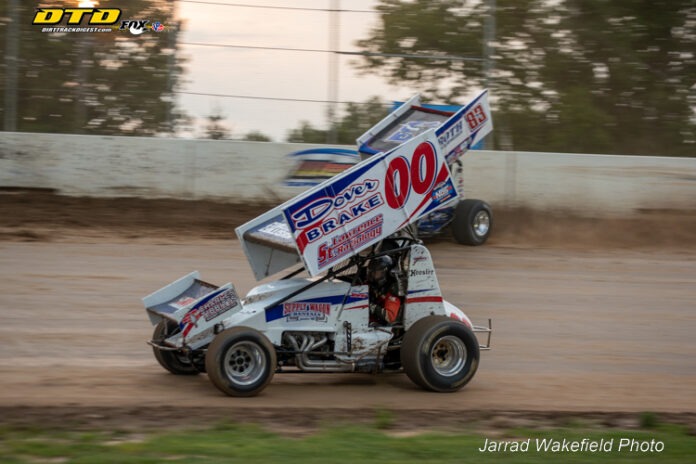 Danny Varin got to experience the full gambit of emotions after racing two nights with the World of Outlaws NOS Energy Drink Sprint Car Series.

Things didn’t go to plan for Varin on Friday night at the Ransomville Speedway.  Varin’s night ended early after tagging the outside wall.  He was disappointed afterwards with his performance.

Saturday night Varin more than made up for the mishap, representing the New York Sprint Car contingent with a strong outing at Weedsport Speedway where he earned a sixth-place finish in the Empire State Challenge.  Varin advanced from 15th to sixth which allowed him to pick up hard charger honors as well.

“We’ve been searching all year,” cited Varin.  “We haven’t really felt good.  It seems like every time we hop into this 410 it’s the best car that I’ve driven all year.  I’m super happy tonight.  I’m super stoked for the guys.  I’m glad I made it up for them.  I just wish I could have grabbed a couple more there.

For Varin, the sixth gave him some redemption.  His team gave him a good car both nights and he wasn’t able to give them the finish he felt they deserved on Friday.

“I think we could have finished up toward the front there too.  I screwed that up so tonight kind of rebounded.”

Varin is no stranger to Weedsport.  He’s got Empire Super Sprint wins at the tricky third-mile.  That experience helped him find success on Saturday.

“It gets so slick here,” Varin said of Weedsport.  “We can park it on the bottom and get things rolling for us.  Being here four times a year, knowing kind of what the track is going to do, is kind of a home turf advantage a little bit.”

Varin isn’t sure how much more racing in the 410 Sprint Cars he’ll be doing as the season continues.  His focus remains on the local scene competing with the 360’s.  The 410 will continue to be reserved for rare occasions, which makes it tough to get completely comfortable in the car.

“I don’t know, we might pick off a couple at the end of the year,” stated Varin.  “Like Ransomville, never been there before, and we jump in with the World of Outlaws at a track you’ve never raced at before in a car that I haven’t driven in three years.

“Going down to Pennsylvania is tough for us.  You expect a lot, but in reality, if you haven’t raced there, it’s tough.  We wanted to go to Williams Grove this year, but we didn’t make it due to work.  I don’t know, if something breaks free we’ll be going.”

Varin is hoping to get things rolling in the 360 as well as the season hits the final couple of months.  The team has a new chassis on order as they look to make improvements to their team for the stretch run.

“We are fiddling around there,” he said about his 360 program.  “We haven’t been very good there.  We have a brand-new X-1 on its way through Jason Barney.  We haven’t been good.  We’ve been searching for the last two years really.  Hopefully we can get back on track and put some W’s in our bank.

“We took a big leap of faith, but we are going to jump on board with Jason.   The information I get back from him is very good and it’s truthful.  He’s always helped me out in the past.  I don’t know, we’ll see what we can do.”