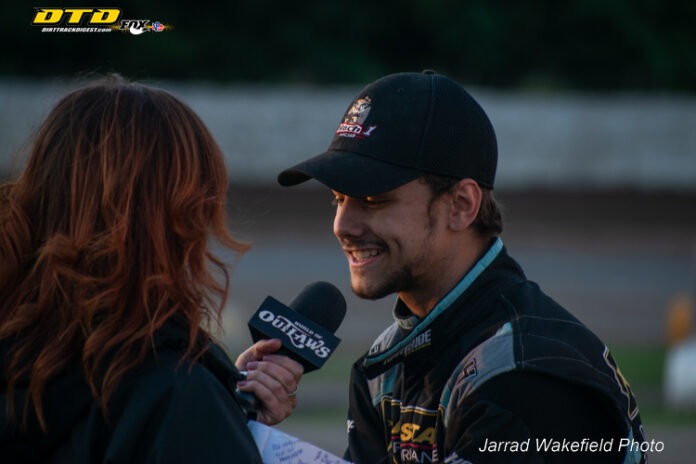 On Wednesday afternoon the World Racing Group issued one of the harshest penalties even given to a driver with the World of Outlaw Sprint Car Series.

Aaron Reutzel was fined and suspended by virtue of competing with a car that was deemed illegal upon pre-race inspection Saturday afternoon at the Weedsport Speedway.

The infraction included illegal tubing on the frame as well as taking a tech sticker from one car to another.

The punishment included the following for Reutzel and his Roth Motorsports Team as released by the series this afternoon:

“For the violations, Participant/Driver Reutzel has been fined $10,000, which must be paid by Aug. 28, 2021, or he will be subject to additional penalties/fines. Reutzel also will be deducted 1,000 World of Outlaws Sprint Car Series 2021 Championship Driver Points. Furthermore, Reutzel is suspended from World of Outlaws Sprint Car Series competition for 30 days from the July 31, 2021, infraction date.

Paulie Colagiovanni finished in the runner-up position on Friday night at the Ransomville Speedway to Reutzel. The rumblings made their way through the pits on Friday before Reutzel was confronted on Saturday afternoon prior the action at Weedsport that the car in use was illegal. Reutzel admitted the infraction and switched cars prior to racing at Weedsport.

Did this infraction keep Colagiovanni from the win? We’ll never know as no one can confirm the car was the same car that was run on Friday. The car passed post-race technical inspection.

Colagiovanni is taking it the best way possible as a second place with the World of Outlaws is something that he and the team is proud of as they competed and proved that they can hang with the best Sprint Car racing has to offer.

“We’re just happy that we were able to run so well with the World of Outlaws,” said Colagiovanni. “We are proud of our second-place finish. We can’t change what happened or the outcome. The World of Outlaws are a first-class organization and did the what they thought was best for all involved. We respect their decision.”

After finishing eighth in the finale on Saturday, Colagiovanni looks forward to the next time he gets to compete with the Outlaws, but for now he’ll turn his attention to competing with the Empire Super Sprints as he looks to defend his 2019 championship.

“We had a lot of fun going up against the best drivers in the country,” stated Colagiovanni. “We would have liked a better finish on Saturday night, but we can’t hang our heads after a top 10 finish against the Outlaws. Now we need to focus on our attention back on the Empire Super Sprint Tour. We have some points to make up if we are going to have a shot at another championship.”

Colagiovanni returns to 360 Sprint Car action this weekend with the Empire Super Sprints and Patriot Sprint Tour at the Land of Legends Raceway while the World of Outlaws return to racing this weekend at Federated Auto Parts Raceway at I-55 for the Ironman 55.

Parker-Price Miller has been named as the driver of the Roth Motorsports No. 83 for the weekend’s events as first reported by SprintCarUnlimited.com.