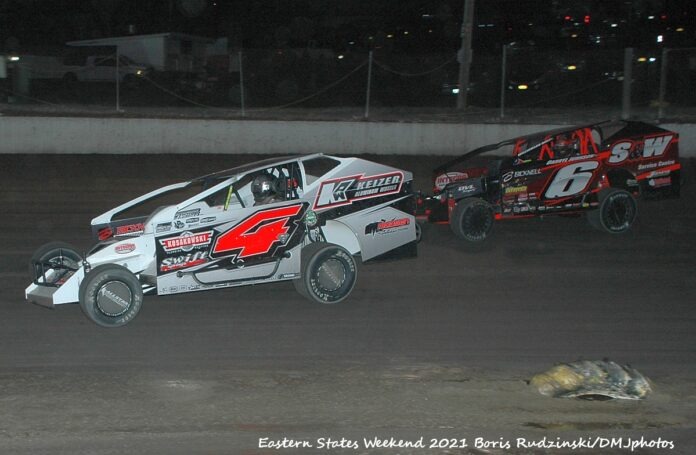 You never know how things are going to go whenever a new partnership is formed, especially in racing.

Saturday night Matt Sheppard and car owner Vinny Salerno debuted a brand-new car for running of the Eastern States 100 for the small-block Modifieds.  It resulted in a solid overall effort as Sheppard came home second in the final rundown to Stewart Friesen at the Orange County Fair Speedway in the first effort together in 2021.

It was a bit of an odd pairing as Sheppard is a Bicknell loyalist while Salerno has always been a Teo guy.  They were able to work out the details allowing Sheppard to race a Bicknell in the event.

“We’ve been struggling a little bit and wanted to try and see if we can get our cars better,” stated Salerno.  “Matt wanted to be loyal to Bicknell like I’ve been loyal to Teo.  I got a frame and body and we swapped everything over.  Everything on this car is Teo parts except for the frame and body.”

It isn’t the first time the pair has worked together as Salerno indicated that Sheppard made a start for him once before at Orange County.  They maintained a relationship over the years with Sheppard utilizing Keizer Wheels.

“Matt and I have been friends,” said Salerno.  “He’s run Keizer Wheels since I’ve been doing it.  He’s been one of our main supporters.  He actually drove for me, I’m thinking 2011 or ’12.  He didn’t have a ride and we had a spare car and he drove it. We are friends.  We aren’t close friends, but we talk.”

It wasn’t a strong start for the team as they struggled in time-trials before figuring things out for the heat race.  Matt took responsibility for the car not having speed initially.

“We struggled a little bit in warm-ups and time trials,” mentioned Sheppard.  “I told them the car felt really good, but I’m not sure why we aren’t that fast.  In the heat race I figured it out that I wasn’t pushing the pedal all the way to the floor.  That was a little bit of an issue.  There was some kind of weird throttle spring deal in it.  I thought I was wide open and it wasn’t.  I figured it out in the heat and we turned the fastest lap of the night.  I knew then we had something.”

Sheppard went off from the 12th starting position before working steadily through the field.  It took him until just after the halfway point to move himself into the runner-up position.  He stalked Friesen from there.  He just wasn’t able find a way to get around him.   He closed on him late, but came up just short.

“I think we really came on the second half of the race,” cited Sheppard.  “I think it was a matter of he (Friesen) was running that extreme high-line and I was running the middle.  The middle was already black and I think that the little bit moisture was getting less and less and less on top which made me get faster and faster and faster.  It would have been interesting had the top had blown off a little bit more.  Maybe we would have had something for him.”

The pair indicated that there hasn’t been any talk of future plans at this point, but Sheppard stated that he’d be willing to find a way to compete together again.

“We haven’t talked about that,” said Sheppard.   “The season is pretty much over here.  I don’t know.  We’ll have to talk about it.  We have one of my seats in the car.  Hopefully we can run it some more.”