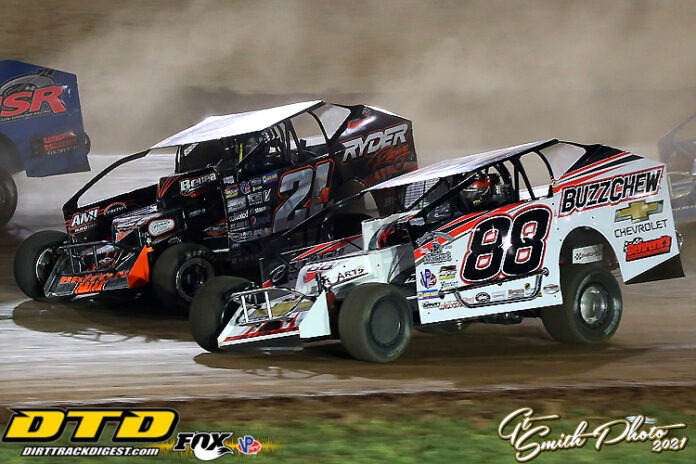 Modified racing in the northeast has experienced an offseason financial boom that is unrivaled in the history of the sport.

The point fund for the series has also ballooned to $25,000. Meanwhile, the Super DIRTcar Series announced that the series champion will now garner a $60,000 payday with an increase added to every position. It’s a great time to be northeast Modified driver and fan.

With that said, there was one possible conflict between the two series that was slated for September 17th. Deyo’s Elite Series is scheduled to be at the Fonda Speedway for the Fonda 200 while the Gerald Haers Memorial for the Super DIRTcar Series was going to be competed at the Land of Legends Raceway.


Thankfully, the conflict is no more. The Land of Legends Raceway and Super DIRTcar Series officials announced the event has been removed from the tour schedule. The event will continue, but there will be no Super DIRTcar Series points attached to it allowing drivers to choose which event works for them.

“In conversations with Paul Cole, we both felt it was best to take the Haers Memorial off the Super DIRTcar Series schedule,” commented Director of DIRTcar Northeast Series and Sanction Dean Reynolds. “The event will still be run with our full support, but this enables our Tour followers to race without a schedule conflict. Paul and I both thought this would be best for all involved. It allows drivers and fans alike to choose the event that best works for them.”

When contacted, Cole, the promoter of the Land of Legends Raceway, echoed the comments of Reynolds.

“This is good for racing,” stated Cole. “This is good for the fans and it’s good for drivers. Drivers and fans are going to benefit. We’ve been doing our 12 Days of Christmas news so we’re happy that this can be one of them. We hope that everyone has a great Christmas.”

The event at Land of Legends remains DIRTcar sanctioned for the big-block Modifieds while paying $10,000 to the winner and $1,000 to take the green. A 358-Modified bonus will also be paid. The Empire Super Sprints highlight the Friday portion of the weekend with a special event for Sportsman teams being planned for the revamped weekend as well.

Deyo, promoter of the Elite Series and the overall Short Track Super Series praised the move as it shows cooperation can happen. When Deyo released his 2022 schedule for the STSS, one date that was notably missing from the North Region schedule was the Short Track SuperNationals at Afton Motorsports Park. The event will still run, but like the Haers Memorial, it will no longer carry points. This allows drivers to stay at Oswego Speedway to compete in the Salute the Troops 150 and a possible $20,000 payday.

“This is a great day for Modified racing,” stated Deyo. “With all the money on the line in 2022, it’s really awesome drivers will be able to race both series without conflict. This is a big step forward for the betterment of our sport. The excitement is building even more for our Halmar International Elite Series.”

“I’m really happy that both series gave a little bit for the betterment of the racers and fans,” said Williamson. “I think in the long run it will help Modified racing grow, and hopefully, lead to more cooperation throughout our sport.”

Peter Britten was a regular at Land of Legends Raceway and on the tour in 2021. He also competed in a handful of Short Track Super Series events during the season.

“It’s the right call,” stated Britten. “The northeast Modified world needs cooperation if we are going to keep pushing our sport forward. We’ve got some great momentum going right now on both sides of the fence with some awesome events and purses that are being offered up. This is a step in the right direction. Promote your event and entice teams to come. If you do a good job they will show up. That’s how it should be. The sport wins this way.”

In the end, as a Seinfeld fan, I’m just going to call this one a Festivus Miracle. The northeast Modified season just got a little better for all of us and offered some hope that everyone can work together for the good of the sport.

UPDATE: The Super DIRTcar Series has added a date on Thursday, July 28th at the Orange County Fair Speedway.