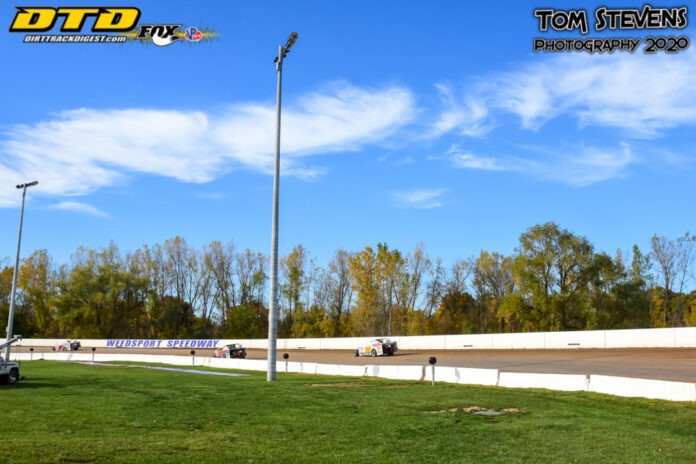 Despite the 2021 racing season being one of the strongest in recent years for the Weedsport Speedway, track promoter Jimmy Phelps and his team aren’t resting on that success. They want to do better.

As part of the quest to be better next season, changes are coming to the one-third mile oval. Changes that should improve the fan and driver experiences.

“Last year we did really well,” commented Phelps. “I think we had our best year ever from a participation standpoint. Everything went off really smooth. We had some great nights with some really good racing, but we felt like we did a disservice to the fans and the racers by not giving them the best track that we could put forth. That is priority one. Get the banking back, get some new clay on there and get something we can work with. We want to give everyone the experience they expect from Weedsport.”

New clay, additions to the banking and small changes in track layout are all things Phelps believes will improve the racing at ‘The Port’ while helping them reach their goal.

“Over the course of the last few years the clay has moved around and there are some spots on the track that needed to have some grade changes done to get some elevation,” said Phelps. “We want to try and get that top opened back up. We are also trying to alleviate some of the congestion that we get in turn four so we are changing the shape of that a little bit.”

Work has already begun on the project as local track guru Jeremie Corcoran has come in to assist with the work. Dan Bauman, who preps the track for racing events, is from Western Pennsylvania and does the track at Lernerville Speedway. With Jeremie’s proximity to the facility, it makes life easier on all involved.

“Jeremie helped us find some clay,” mentioned Phelps. “He is close to track and we were already working with him on other projects so he agreed to help us put it down. Dan has been really good for us. It saves him from having to come from Pennsylvania on a moment’s notice when the weather is nice enough to put clay down.”

For Phelps, these changes all about making the Weedsport experience better. They already have one of the premier facilities in the country. Their goal is now to have a racing surface that mirrors the facility. They just weren’t able to do that with the clay that’s on the track.

“We aren’t trying to get away from Weedsport slick, we just want when it goes slick, we want to try and have the track so you can use the whole race track,” stated Phelps. “We were able to do that years back, and from time to time, we still can. We just feel with the shape and the clay we are working with right now there isn’t a lot we can do.”

So when you return to Weedsport in 2022, the changes will subtle, but they should help get the track back to where Phelps and company feel it should be. A track that produces great side-by-side racing every time cars hit the speedway.