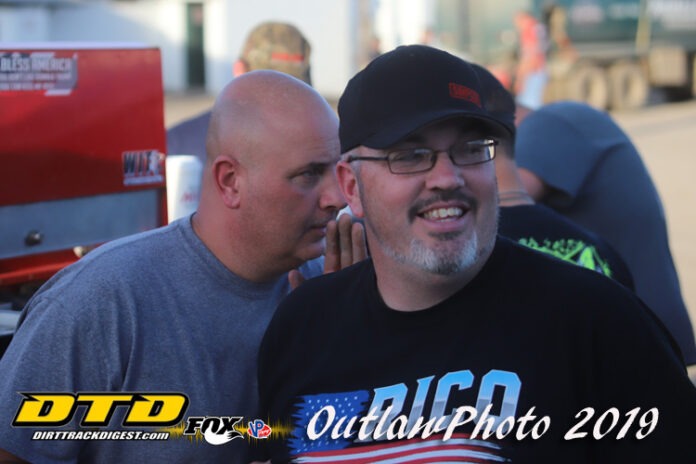 Everyone knows racing is an addiction.  You may be able to get away from it for a while, but very few people can quit and never comeback.  Somehow, someway, those that have been involved in the sport always find their way back to it because of the enjoyment that it brought them and their family.

That is exactly what is happening in the 2022 season for Rocky Warner.  The Fonda Speedway co-champion is set to return to the Track of Champions while continuing his Friday night endeavors at the Utica-Rome Speedway.  He’ll compete on the Short Track Super Series and with the Super DIRTcar Series.  Nothing has really changed except for Warner with the exception of who he is driving for on Saturday nights.

Last season Warner competed for famed car owner Jake Spraker.  This year, he’ll take over the driving duties for a former owner who has found his way back to the sport.  That is the accomplished car owner Tadd Parks.  Parks has numerous titles and wins at Fonda Speedway with Stewart Friesen, now he returns with Warner.

For Parks it’s the right time and right fit for what he’s got going on in life.

“I talked to Rocky a little bit; he’s been breaking my chops about it a little bit,” joked Parks.  “I ran it by my kid (Layne), he’s 10, and he was so happy.  He was too young when I was doing it before.  Just to see his face light up.  It was a pretty awesome.

“My father has had some health issues the last few years.  He’s finally on the right track.  A couple weeks ago he was talking on the phone with a buddy.  He was talking about how much he looked forward to getting back to the race track.  It just made sense.  My kid is excited about it and my father didn’t even know about it, but that was the final decision.  We’ve lived for this sport forever. If I can make him happy and my kid happy, I’m excited about it.  I missed it.  You never really get away from it. “

Warner has always had an affinity for Parks and what he has accomplished in the sport.  The two have been friends for a long time.  Warner let it be known over the years that he’d love the opportunity to drive for him.

“I always wanted to drive for Tadd back when he had Stew,” commented Warner.  “I was hoping to always be the second car to Stewie.  They always helped me out back then.  I’m not looking to replace what him and Stewie did.  I’m hoping we can make our own path and go that route.

“When Jake and I split I mentioned to him that if you are ready, I am ready.  I kind of put it out there to him to see if he wanted to do something.  He told he might do something.  He thought about it.  I kind of thought he wasn’t going to do anything at one point.  Then he called me up one day and said ‘let’s do it.’”

The team has already purchased a new to them 2021 Bicknell chassis and they have a Pro Power Engine on order.  Parks left the decision making up to Warner to prepare for season.

“I’m leaving things to him, to be honest, pushing him to do it,” said Parks.  “With my business the last few years, I’ve put certain people in certain places and told them here’s what you need to do to just take the burden from me.  I pushed him to get the car and motor.  I told him you put this deal together.  I don’t have the time or the patience.  Since I’ve been out of it, it’s changed.  It’s all different.  I told him to figure out what we have to have and we’ll get it.”

This will be the first time in recent memory that Warner will not be competing for Spraker on a weekly basis.  Spraker is known to have high expectations for his drivers.  He brought Warner into the Modified ranks before retiring at the end of the season.  Warner was thankful for all he did for him.  Driving for Parks will have its own pressures.

The team has yet to officially settle on a number, but they are leaning toward to running the No. 97 on the car.

Warner will continue to be behind the wheel of the No. JS98 for Jason Simmons in 2022.  He’ll supply Warner with equipment to compete at Utica-Rome, the Short Track Super Series and the Super DIRTcar Series.

“I talked to Jason about everything,” said Warner.  “I was up front and honest with him that I was going to get a deal done with Tadd.  He was cool about it.  He’s offered to help us out.  He told us we can use his trailer and whatever we need.  It’s really cool to have both teams working together.  I think when everyone works together things go a lot farther that way.  I feel we are going to be in a good spot.

“Jason loves to race.  I felt like he would have taken on the Fonda deal, if need be, to help me out.  I was kind of looking forward to doing something separate just to help keep Jason’s stuff fresh.  Jason loves to travel and Tadd just wanted to do Fonda.”

The plans right now call for Warner and Simmons to make their season debut in the state of Florida.  Warner wasn’t sure whether that would be at All-Tech Raceway for the Short Track Super Series or at Volusia Speedway Park for the DIRTcar Nationals.  It depends on what help is available for the trip down south.

If they only have the crew help to do one, the team is leaning toward Volusia simply because Jason’s father lives in close proximity to the facility.  As Warner said, “We’d like to do both.  We are not picking or choosing sides, it’s just logistics.  Jason’s father lives right next to Volusia.”

From there the team heads to Cherokee Speedway for the Brett Deyo Short Track Super Series Elite Series opener.

The Parks and Warner debut will come in early April when Fonda Speedway officially kicks off the 2022 season on April 16th.