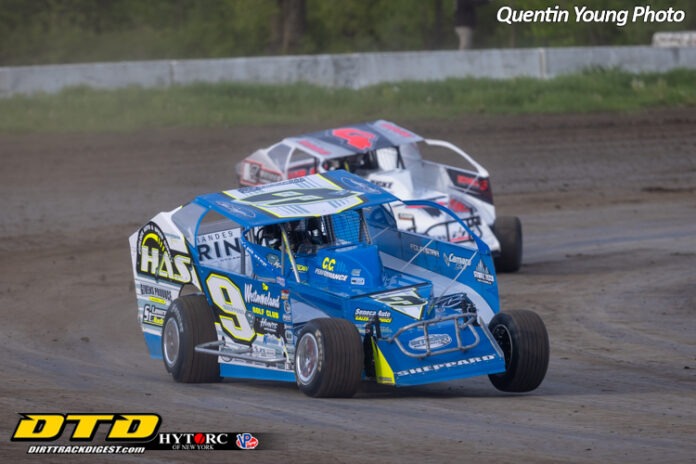 Matt Sheppard has found his groove, which is bad news for the rest of the Modified world.

Sheppard has had an impressive week so far winning the Short Track Super Series event Tuesday night at his former home the Outlaw Speedway.  He backed that up with a dominating performance at the Can-Am Speedway leading every lap in the non-stop 75-lap affair.

“Things are going our way,” stated Sheppard.  We are getting good draws (the pole), getting cautions when we need them and not getting caution when we don’t need them.  Lady luck is just as big a part of it as anything.  You can have a fast race car and do a lot of things right, but if you don’t have luck on your side you’re in trouble too.”

Sheppard admitted that the team has found something with their setups that seems to be working well.  They’ve been able to make adjustments to get better all night long.

“It’s probably a little bit of everything,” said Sheppard when asked why the team has been so fast.  “Setup wise, we are zeroing in on some stuff we like in different places.  Of course, it’s not like the old days where you found a setup that was working for you and you took it everywhere.  We are running different stuff on our Hoosier car and our American Racer car.  We are making better decisions in the pits and we are getting good luck on the race track throughout the night.”

Shane Andrews, series announcer, stated at the conclusion of the race that it was Sheppard’s 75th career series win.

For the second consecutive night Sheppard beat out Stewart Friesen for the victory, although the finish wasn’t nearly as close as the previous night at Outlaw.

“He’s the one we are always trying to beat,” commented Sheppard.  “We are on a little bit of a hot streak.  Things have been going our way.  He’s been good too, damn good.  Tonight might have been one of those nights where things for us went a little better than him.  Who knows, if he started up front and I started where he did things might have been different.”

Friesen Looking for Something Extra

After another hard fought second place effort Stewart Friesen was all smiles, but admittingly hates finishing in second.  Friesen, unlike Sheppard, commented that the team is just a little off and searching for something to get them back to victory lane.

“Two nights in a row,” stated Friesen about his second place effort.  “It’s another second on the series.  I think we’ve had five second places here the last couple of weeks.  It is what it is.  It’s good to be in the top three, but we are lacking a little bit.  We’ll keep working on it.  I’m proud of my guys.  It’s good, but we all want a little bit more.”

While Sheppard was dominating at the front, Friesen had to come from the eighth spot in the starting order.  Friesen had one of the best battles on the track before getting to second with Jimmy Phelps and Mat Williamson.  The trio was three and four-wide at times in traffic battling one another.

“We were probably better than some of those guys when we were racing them, I just couldn’t get to where I wanted to be,” he said.  “I got clear of them and there were lapped cars where I wanted to be for a while.  Then, the last couple of laps, I started creeping the middle of three and four and I should have been doing that with 30 laps ago and just taking care of my stuff. I definitely beat up the right rear a little more than (Tim) Fuller did and Sheppard for sure.  It is what it is.  We had to race from a little farther back and it went green to checkered.”

Tim Fuller finished in the final podium position after regrouping from a lap one hiccup.  Fuller, who started sixth, tried to make a run to the outside on the initial start of the race and it backfired, dropping him deeper in the field.  He recovered nicely over the course of the 75-laps to get back to third.  He was closing in on Friesen as the laps clicked off but simply ran out of time.

“I bobbled there on the first lap trying to get around a bunch of them,” mentioned Fuller.  “I was just trying to charge it too hard, too early.  As it was, it was do or die.  I handicapped myself there. I would have loved to see a caution there with about 10 to go.  It was good.  I was closing.  I think I had a better car than he (Friesen) did.  That’s all it was.  You look at the right rears and I don’t think mine was as bad as everyone else’s.  They were hard on them.”

Friesen was fastest in qualifying with a lap of 18.704.  Heat wins went to Jack Lehner, Sheppard, Fuller and Billy Dunn.  Marc Johnson and Larry Wight each won a Last Chance Showdown.

C.G. Morey clipped an implement tire at the start of the second Last Chance Showdown.  The frontend was destroyed ending his evening…

The showed was delayed by roughly an hour after it was discovered that the scoring loop wasn’t working.  Crews went to work and installed a new loop to allow for time trials to continue…

The Le Mans-style start was scrapped due to cold temperatures.

Mike Gular and Alex Yankowski, new tour regulars, made their way to the North Country for the first time.  Gular faired better finishing 15th while Yankowski was 19th in the final order…

Billy Decker hopped into Darren Smith’s No. 12 for the feature.  He finished 17th.