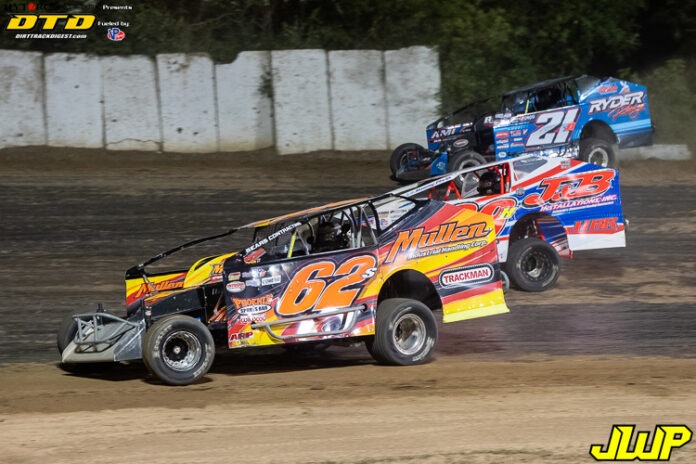 The more things change, the more they stay the same.

Matt Sheppard is simply rolling.  Coming into the Super DIRTcar Series race at Brewerton Speedway on the second night of SummerFAST Sheppard had won two of the last three series events and two of his last three races.  The only blemish in that stretch came on Monday night at Weedsport Speedway where he finished third.

Tuesday night he made it three of the last four as he led all 60-laps of the feature for his 78th career Super DIRTcar Series victory.

Brewerton Speedway is Sheppard’s former home, but he wasn’t 100 percent on point Tuesday.  He was better than the rest and that’s what mattered allowing him to win the 60-lap affair.

“It’s like starting all over again,” he said.  “I’ve only been here, maybe twice on coils.  It’s just a different animal. I just never really felt comfortable all night.  I still don’t know if I really felt all that comfortable in the feature, but we drew a good number, held everybody off and moved around when we needed to move around and we were able to cross the line first.”

The only major challenge to Sheppard’s dominance in the feature came late as traffic came into play.  Sheppard just couldn’t find a way through, allowing the field to close up on him.  At one point, second place finisher Tom Sears Jr., was on his bumper looking for a way.

He eventually got a caution on lap 58.  With a clear race track now in front of him he drove away from the field for the win.

“They were side-by-side and there was nowhere to go,” said Sheppard.  “I don’t know if I was quite good enough to split the middle. Finally, I think I threw a slide job or something on Alex (Payne), but yeah it was like a roadblock. There was just nowhere to go. It was definitely getting a little dicey. That’s for sure.  I don’t know if I wanted to see that caution or not, but anytime you get out of rhythm like that it’s tough.  I guess it didn’t hurt.”

Tom Sears Jr., showed the Super DIRTcar Series just how tough the weekly competition is at the Brewerton Speedway.  Unlike most of the competitors in front of him, Sears stayed almost exclusively on the bottom of the race track.  He was patient, hitting his marks on the inside to drive up from ninth to second.

“At Brewerton to run the bottom you have to be patient and hopefully the top goes away enough to where it pays off,” said Sears.  “It was a shorter race, 60 laps is kind of a short race. I didn’t know if it would pay off. We just didn’t want to get up there and hurt our tires for late in the race, but it worked out good to be patient.  It really started coming on the last 20 laps to 25 laps.”

Much like Sheppard, Peter Britten was a former regular at the Brewerton Speedway.  Britten found the top lane to his liking, but was able to move around when he needed to.  He started from the 10th, got as high as second before falling back to fourth then rallying to get one more spot to finish in third.

“It’s been a while, but just like old times floating around,” said Britten.  “The track was great.  You could run all over the track, which was just awesome. Honestly after redrawing 10th I didn’t have high expectations for the race.  There are a lot of good locals, there’s a lot of good cars in the series race, but the locals here know how to run it.  Tom Sears was good there at the end.  I was just hoping for a good run. All of a sudden, I was in second and Matt (Sheppard) wasn’t pulling away from me.  I felt like we were pretty good.  I knew at some point someone was going to start rolling the bottom and come along and it ended up being Sears.”

It was Britten’s first top five on the Super DIRTcar Series since racing action ended at Volusia Speedway Park.  He’s had a handful of top 10 finishes, but hasn’t been able to crack the top five.  This was a much-needed pick me up for the Australian native.

“It’s been a little bit of a tough year on the series,” said Britten.  “We just haven’t been able to put a race together.  It seems like when I’m running well, we break something and if I don’t break something, we run like shit. It just hasn’t been a lot of fun lately.  This is what I needed. This will get me a little bit more confident. I feel like I’m doing something right again. Hopefully the next couple of days go well.  We’ll see what happens.”

Williamson Gets off the Schneid

It’s been a struggle in 2022 for former Super DIRTcar Series champion Mat Williamson.  For whatever reason, things just haven’t been going well for the Buzz Chew Racing team.  He’s second in the point standings to Sheppard, but wins have been hard to come by as they keep searching to get better.  Tuesday night, the team had a decent finish crossing the line in fourth.

“I feel like that one long run I was catching the leaders,” said Williamson.  “I saw Sheppard in front of me and I was like ‘What the heck is that?’  We haven’t seen that in at least three months. So obviously I’m happy, happy we are back in the top five. It’s no secret we’ve struggled lately. This is just a stepping stone.  We said we needed to get back into the top five before we can start worrying about winning races. I feel like if this would have been a 100 lap race, we might have been winning it.”

Tim Sears Jr., managed to edge Jimmy Phelps at the line at the checkered flag for the fifth position.  It was obvious the Brewerton regular was disappointed with the effort.  He was hoping for more.

“We were a little bit better than where we finished but we just had some brake issues right from the beginning of the race so it just made it a little tough to drive,” said Sears. “My left front brake was hanging up so it was really hard to keep the car straight.  The track was too slick to not keep it straight. It was definitely tough, but we managed to finish in the top five.”

On Wednesday SummerFAST shifts to Fulton Speedway.  Sears is looking forward to the event as he dominated the track’s weekly action in the DIRTcar 358-Modifieds.

“At the Outlaw (200) last year we were really good, but Mat got us at the end,” said Sears.  “We had our big block-car at the Outlaw so I feel like we got a pretty good package going into there.  I’m excited for my home track.  We run good there every week. We know how to get around there. We got more laps and than most of these guys so we’ll see what we can do.”