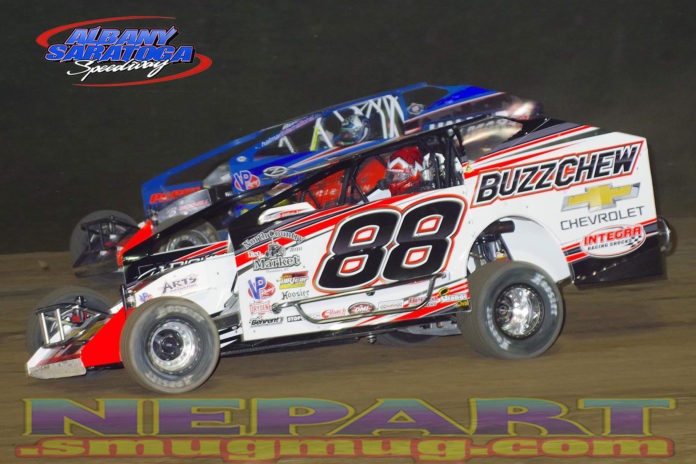 During the days of the gold rush and western expansion, covered wagons would travel west in search of gold. In previous years, the best in the Northeast and beyond would descend on Central New York for Super DIRT Week. In 2020 however, the drivers and crews will take their “wagons” and head East to Central and Eastern New York, for a week’s worth of racing and glory, DIRTcar Racing’s OktoberFAST.

It has been said and seen over the years that the drivers that call the Niagara Peninsula, and Niagara Frontier home are some of the best in the business. Several teams from throughout the region will make the pilgrimage to Central New York to compete in DIRTcar Racing’s OktoberFAST presented by DIRTVision October 6-11, featuring the Super DIRTcar Series big-block Modifieds, small-block Modifieds, Sportsman, and Pro Stocks.

Leading the “Mighty Modifieds” from Western New York and Southern Ontario is reigning Big Block Modified Super DIRTcar Series Champion Mat Williamson. The St. Catharines, Ontario pilot has already picked up 14 wins in 2020, with nine being in the family-owned S&W Service Centre #6, at Merrittville, Humberstone, Brockville, and Cornwall. Most recently, Williamson won the 96er up at Brockville this past Saturday night. Williamson will be behind the wheel of the Buzz Chew #88 for the Big Block races. “Money Mat” will also be racing at all three of the 358 Modified events throughout the week driving the Cocco Racing, Wendt’s Propane sponsored No. 6.

“I am looking forward to all the races during OktoberFAST,” explained Williamson.

Like Williamson, fellow Ransomville regular Erick Rudolph will be racing in all nine Modified races during the six-day period of OktoberFAST, driving the BlueCross BlueShield of WNY, reVive Spine Center, Stirling Lubricants, BBL Racing No. 25. One track that is standing out to Rudolph is the Fulton Speedway.

“We haven’t had the success at Fulton that we have at the other tracks that we are racing for OktoberFAST,” Rudolph said.

“The Highbanks” have been troublesome for Rudolph.  The third-generation driver from Ransomville has collected checkered flags this season, racing wherever and whenever possible. “The Firestarter” earned the win in the Big Block/Small Block Challenge at the Can-Am Speedway just a couple of weeks ago. Before the win at Can-Am, Rudolph swept both the big-block and small-block races held at the Tri-City Speedway in Pennsylvania and he also earned a win at Lernerville. Rudolph has eight-career Super DIRTcar Big Block Modified victories, with the most recent being at the Merrittville Speedway last season.

“Hot Wheels” Greg Martin will be attacking the 358 Modified portions of OktoberFAST, with stops at Utica Rome, Fulton, and Can-Am. The veteran from Youngstown has ventured on the road in 2020, racing at several tracks in Pennsylvania. Joining Martin is divisional rookie Matt Steffenhagen. The Delevan, N.Y., racer has moved up from the Sportsman and most recently participated in the Gerald Haers Memorial at Land of Legends Raceway.

Modified rookie Robbie Johnston will be taking his Innovative Auto Repair No. 33j to Central New York. The Lockport native moved up from the Sportsman this season, making his Big-Block Modified debut at Land of Legends in July.

“I’ve only raced at Fulton so it’s exciting to race at different tracks,” Johnston said.

Modified drivers Rick Richner (Niagara Falls) and Justin Wright (Piffard) will also be tackling the 358 Modified portions of OktoberFAST. These drivers and a few others from the Region will join the best in the northeast all week to try to earn checkered flags.

The Sportsman contingent from the region will have the 2020 Genesee Speedway track champion Cameron Tuttle. The second-generation driver from Wilson that has a pair of wins at the 1/3rd mile Genesee County Fairgrounds in 2020 is planning on running the entire slate of events.

Tuttle will be joined by a slew of drivers that raced at Genesee in 2020.

Second-generation driver Zach George from Wilson will be running at five of the six events. Heading into OktoberFAST, George will be George is racing the family-owned #126 ride at Albany-Saratoga, Fulton, Can-Am, Fulton, Land of Legends, and Weedsport.

“I am looking forward to running at Albany-Saratoga and Fulton for the first time in my career,” George said. “Weedsport is my favorite track and I’m excited about racing there.”

George will be joined by his teammate Cody Wolfe as the Wolfpack Racing team will be racing at the same tracks. In case something happens to George’s 126, he will jump into the 80x machine that Cody Wolfe will be piloting.

Speaking of Wolfe, the Appleton resident was the 2018 Novice Champion at the Ransomville Speedway. He stepped away from racing in 2019 but has come back in 2020 to run the last two events at Land of Legends Raceway in Canandaigua.

“I’m definitely looking forward to running Can-Am simply because I’ve never run there before,” Wolfe said. “From what videos I have seen, Can-Am looks fast and looks like a lot of fun to drive.”

Four-time Genesee Speedway track champion Kyle Inman will be a force to reckon with during OktoberFAST. The Darien, NY driver has his Turnbull Heating and Cooling, Bellinger Electric, Troyer Race Cars No. 20k ready for battle in Central New York. Inman is looking to put his car in victory lane, just like he did last season during the Chevy Performance 75 at Super DIRT Week.

Ransomville’s Derrick Borkenhagen has registered to race at all five Sportsman events during OktoberFAST. The driver of the All Right Home Improvement, RPM Property Management, Ray’s Tavern No. 25 is excited about running five races in six days.

“It will undoubtedly be a huge challenge competing in five races in six nights across Central and Eastern NY, but I’d like to think we are up for the challenge,” Borkenhagen said.

Noah Walker will be racing his Military Road Save-a-Lot, JW Services No. 22 at Fulton, Land of Legends, and Weedsport.

“We cannot wait to go and try our luck against the best in the Northeast,” Walker explained.

The North Tonawanda driver has a pair of podium finishes in the last two races at Genesee Speedway since returning after a substantial wreck in late July. Walker also secured a B-Main win earlier this season at Land of Legends Raceway.

Brett Martin is a veteran of the Sportsman ranks, calling the Ransomville Speedway home. He will be behind the wheel of the Finish Line Auto Detail entry beginning Thursday night at Fulton and going through the weekend at Weedsport. The Burt, N.Y., driver has strapped in a couple of times this season, including the Sportsman events at the Bradford Speedway, and made a start at Land of Legends.

The Pro Stocks will have a representative from Western New York, multi-time Pro Stock champion and Mr. DIRT titlist Pete Stefanski will be back behind the wheel in Central New York, running all three Pro Stock events at Albany-Saratoga, Utica Rome, and Weedsport. Stefanski has only made select Pro Stock starts over the last couple of seasons while running his Street Stock at Ransomville Speedway over that span.

Listed is just a handful of drivers that are making the trip east against the best in DIRTcar Racing in the Northeast. As of October 3, the total car count for the Sportsman division is over 70, and 20+ of those will be competing all week long.

The cars and stars of Western New York and Southern Ontario will be coming with full force to earn the victories at DIRTcar Racing’s OktoberFAST. The tracks that they will be competing at are some of the iconic and legendary tracks in Central and Eastern New York; Albany-Saratoga, Utica Rome, Fulton, Can-Am, Land of Legends, and Weedsport.

With OktoberFAST being a substitute for Super DIRT Week in 2020, the trip east is one thing that is normal in a time that has not been normal. The racing will be exciting. It will not be the same without the fans in the stands but there are opportunities to watch the events taking place during the week and follow along for all the coverage being provided.