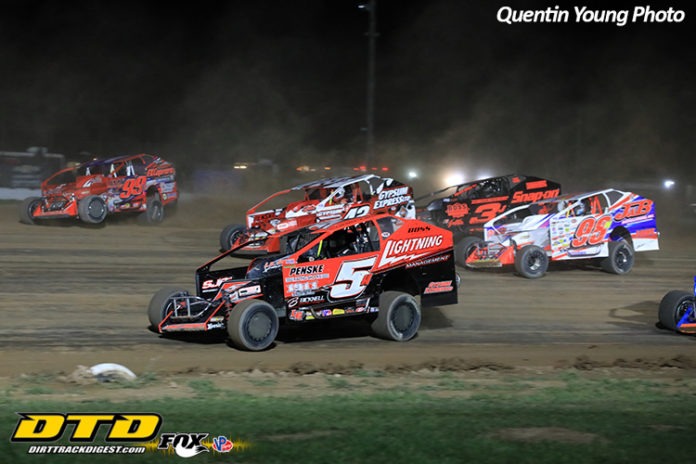 In a year that has been anything but ordinary, the staff of World Racing Group and DIRTcar Northeast created an event that was certainly one to remember.

When the word came from New York State that fans were not allowed at sporting events during the COVID-19 pandemic, the powers that be with DIRTcar Northeast and the World Racing Group had to come up with something as Super DIRT Week 49 at Oswego Speedway could not take place.

“We had five weeks to put this whole deal together,” said DIRTcar Northeast’s Director of Series and Sanctioning, Dean Reynolds. “The event was very well received, even though the US/Canadian border is still closed for non-essential travel. Car counts for the event were over 125, with a high of 235 on the Thursday night show at Fulton Speedway.

“I have to say first off thanks to the race teams. If it were not for them and their support and cooperation, this would not have been a success.  It was a fun, entertaining week, being able to do something different that we have not done before. With no fans, and CDC Guidelines, we just did something to be proud of.

Track promoters and operators also got their dues and gratitude and thanks as they were able to host this event that was one for the record books.

In talks with several drivers, a majority stated that they would like to see something similar to OktoberFAST take place during the summer. DIRTcar’s Reynolds said it is not out of the realm of possibility.

“If we did something like this over the summer, we have to remember that our sanctioned tracks have weekly shows Friday, Saturday, Sunday. I am not sure if a six-day event would be feasible, with running on the weekend and then going on the road Monday-Thursday and back to the weekend again. We just don’t know, but what I do know is that we are looking forward to being back at Oswego in 2021”.

One thing that was not a major factor was the weather. Five out the six shows were able to take place with the only rainout taking place at Utica-Rome Speedway.

“I feel bad for Bill and Kim Shea. It seems that Utica-Rome has been jinxed with the weather,” Reynolds said.

Saturday night at Land of Legends Raceway in Canandaigua, a couple of brief showers slowed the progress of the show, but the track was able to get the whole show completed.

“We knew when the rain was coming at Land of Legends and Paul Cole and his staff did a tremendous job and we were able to get that whole show in,” Reynolds added. “That was my goal to get five out of six shows. I would have been happy with four out of the six but being able to have five out of the six shows taking place, it was amazing.”

Reynolds also reiterated that in talks with track promoters and operators that with the no schedule for the Super DIRTcar Series in 2020, those dates are theirs in 2021.

The DIRTcar officials and everyone that knows Chris Dolack was thinking of him during this week. Chris has not missed a Super DIRT Week, whether it was at the Syracuse Mile or Oswego in over 20 years. Drivers received a #SmilesForDolack decal to display and we all continue our thoughts and prayers for Chris during this time.

The racing action was one to remember with several storylines for the big-block Modifieds. Anthony Perrego scored two big-block Super DIRTcar Series wins at Albany-Saratoga and at Can-Am. Jimmy Phelps won both the big-block and small-block events at Fulton. Not to mention that Phelps won both of his qualifying events and had the pole position in both races.

Mike Mahaney had a week to remember with podium finishes at all big-block events except Sunday night at Weedsport. Mahaney was disqualified following his heat race due to a shock infringement. Mahaney ran the last chance showdown and raced his way from 27th to cross the finish line in tenth.

Some notables that did not win a feature race all week included reigning SDS champion Mat Williamson, but had top five and top ten runs all week. Stewart Friesen had an up and down week, from running well at Fulton and Can-Am, to suffering a broken brake line Saturday at Land of Legends. Friesen did power back to a top-five run at Weedsport after starting 17th on the grid. Erick Rudolph also had an impressive week with strong runs all week long.

Matt Sheppard had a week that he would like to forget, but was able to be in victory lane Saturday night at Land of Legends after a dominating performance.  He was off to a strong start at Weedsport on Sunday and leading half the race until he was passed by race-winner Max McLaughlin.

For those enough that were lucky to be there, the most emotional and celebratory moment was the victory lane ceremony for McLaughlin at Weedsport. With everything that Max and his family went through to be able to continue racing and having Max race the car that his dirt racing idol (Matt Sheppard) built and passing him for the win was a must-see experience that everyone that was there will be able to say that “I was there when…”

“I could hear the emotion,” stated DIRTcar’s Dean Reynolds. “His and his dad’s apartment was next to my office,” Reynolds explained. “To top it off, knowing how close and good friends Max is with Chris Dolack are as we continue to send our thoughts with Chris, it was a great way to cap off the six days of racing.”

The DIRTcar 358 Modifieds, Sportsman, and Pro Stocks put on great racing all week long at iconic tracks throughout Central New York. With Nick Stone winning at both Albany-Saratoga and Weedsport in the Pro Stocks to Kevin Root and Matt Janczuk getting two wins each and Tyler Murray getting his first DIRTcar Sportsman Series win at Land of Legends.

OktoberFAST was an event like any other in the Northeast. It was the first time that the big-blocks went on a six-day, six-night race week and it was a success. When this event was announced at the end of August, DIRTcar CEO Brian Carter said in a release that “we want to keep the teams close to home by celebrating at our home tracks.  We’re putting it all on the line, investing the 2020 Series’ point funds into prize money over the course of a single week so we can put 2020 behind us with a bang.”

From the fans that watched the races on DIRTvision and for those of us that were lucky enough to be there, whether we are a driver, crew, track official, Series official, or media member so to Carter, Cristina Cordova, Jeff Hachmann, Dean Reynolds, everyone involved, thank you for giving us one part of normalcy in a time where it is anything but normal.