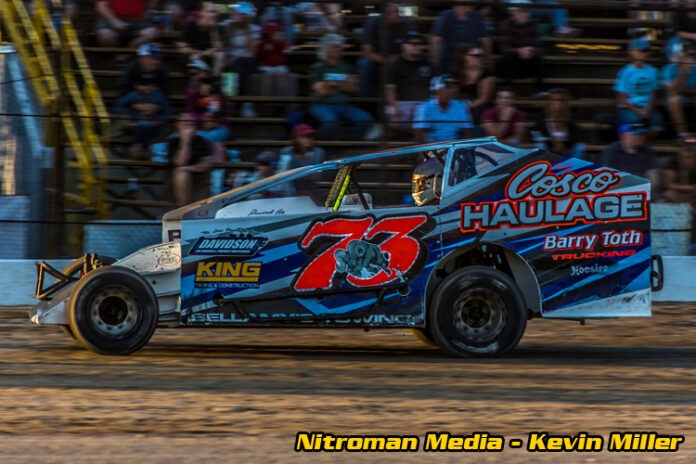 Fourth-generation driver Dylan Davidson is making the move up to the highly competitive 358 Modified division for the 2021 season. The St. Catharines, Ont., racer is making the jump after four seasons in the DIRTcar Sportsman, three years in the Mod Lites and started when he was young in the go-karts. Primarily racing at Merrittville, Davidson also raced at Humberstone Speedway, a facility that his family-owned for over a decade.

Davidson, whose family’s racing roots date back to 1954 when great-grandfather Bob Davidson Sr. competed in his first race, took his first career checkered flag in a Sportsman on Canada Day in 2019, winning the Race of Champions 602 Dirt Sportsman event. The 21-year-old driver then added a second win over a month later in the Bill Willard Sr Stirling Silver Cup at Merrittville Speedway.

“The two wins from the 2019 season definitely motivate me, however, there is still a lot to learn,” Davidson said. “I think what’s motivating me most is being able to learn more about how to drive these cars when I’m racing with and against drivers that have won multiple DIRTcar Modified championships.”

The Niagara Region trio of tracks (Ransomville, Merrittville, and Humberstone) arguably has the toughest field of weekly Modified and Sportsman competition. Several drivers from the region have gone on to success with the Super DIRTcar Series for both Big Block and Small Block Modifieds, most notably Stewart Friesen with his wins at both Syracuse and Oswego, to go along with his presence on the national stage running in NASCAR, DIRTcar Northeast Hall of Famer “Mr. Small Block” Pete Bicknell, “Canada Joe” Joe Plazek, multi-time Ransomville track champion Erick Rudolph, and 2019 Big Block Modified Super DIRTcar Series champion Mat Williamson.

Both sides of Dylan’s family are involved in racing with great-grandfather Bob Sr raced for years at tracks throughout Southern Ontario. Grandfather Barry Davidson raced for seven years and then was the head flagman at Speedway Park in Hamilton, Ontario before being the head flagman at Ransomville, Merrittville, and Humberstone for decades. Father Bobby raced for years at Merrittville, Humberstone, Ransomville and went on to promote and was the General Manager at Humberstone Speedway Dylan’s grandmother Linda Cosco owned Humberstone Speedway with her late husband Pete and continued to operate the speedway after his passing in 2014. Dylan’s cousin Jordan Cosco raced against Dylan in the karts and in the Sportsman division at tracks throughout Southern Ontario and Western New York.

“We felt like it was the right time to move up and support the growth of the Modified division in the Niagara Region, as well as taking our racing program to the next level,” Davidson said.

Prior to the start of what would have been 2020 campaign, Davidson suffered an injury that kept him away from the track for the entire season. “I’m very excited to get back behind the wheel of a racecar in general after my injury prevented me from racing.”

Davidson made one previous start in a Modified back in 2015 at Humberstone Speedway.

“My last time in a Modified was the 2015 Pete Cosco Memorial,” Davidson said.

“Our goal for this year is to basically learn as much as we can. Top 10 finishes would be nice, but we know that this is going to be a huge learning curve moving up from the Sportsman to the Modified.”

Davidson and his race team will be focusing on the weekly competition at both Merrittville and Humberstone. The team also plans on traveling as much as they can to get seat time on every surface possible.

“If the restrictions at the border are lifted, we also plan on making a few shows at Ransomville Speedway,” Davidson said.

“We are thrilled about our partnership with Brock Motorsports,” Davidson said. “The group wants to bring more attention to the racing industry and consists of car and racing enthusiasts who decided to shed some light on the sport so that the school could be exposed to the racing community.”

Since its inception, the group has hosted races virtually to raise money for local charities. Brock University is a public research university in St. Catharines, Ontario, with their main campus just minutes away from the Merrittville Speedway.

“I cannot thank Terry Vince enough at ERD for building a phenomenal motor,” Davidson said. “The chassis is from Bicknell Racing Products.  I would like to thank the Bicknell, Williamson, and Slack families at BRP for building safe, fast, and reliable racecars along with having all the parts we will ever need to be successful.

“I cannot do this without all the support of my family and friends and my papa for watching over me from heaven and keeping me safe.”