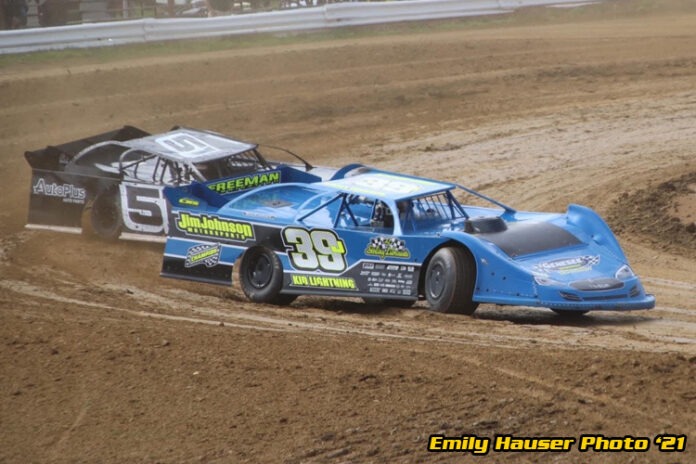 Cars returned to the track for the first time in 2021 at the Genesee Speedway as track promoters Jim and Pam Johnson kicked off their sixth season at the helms of the 1/3rd mile oval located on the Genesee County Fairgrounds.

2020 Sportsman track champion Cameron Tuttle debuted a brand-new 2021 Bicknell. “Practice went decent,” Tuttle said. “The track was a little rough due to all the rain and hit a rough part in turn one and almost flipped. We made sure everything was right with the car and after the second session, the transmission went and that sucks, but that is what these practice sessions are for.”

The Novice division had eight entries on hand, including Brad Duhow. Brad is the pilot of the Hy-Tech Concrete number 20 machine. As he was on the track, he was getting more and more comfortable with each run on the track and was setting quick time in each Novice Sportsman session. Duhow is making the jump to the open-wheeled Sportsman after running at a competitive level in go-karts while traveling throughout New York, Pennsylvania, and Ohio. The number 20 will be coming out of the Dirt Rocket Shop, along with the car that Bubby Pawlak and veteran Scott Kerwin will be campaigning in 2021 at the Ransomville Speedway.

Bailey Logsdon had an eventful practice session in her No. 14 entry. She went off the track in turns three and four and hit a black tractor tire that was protecting the wall. Bailey posted on her Facebook page that, “It was a rough day, but we will be back next week to try again.”

Bailey also thanked everyone in advance for those going to put the time in during the week to get her back on the track next weekend.

Bandit drivers Jake Bansmer, Tyler Guzzardi, and Greenley George are all making the jump together to the Novice Sportsman as well. All were impressive in their first runs in a Sportsman at the 1/3rd mile oval in Batavia.

14 Street Stocks were on hand, including divisional co-champion Bill Taylor. Multi-time feature winner in 2020 John Zimmerman was hooked up and fast throughout the day. Mike Kelly was also fast, and Dale Rissinger debuted a brand new car and his father-in-law will be driving a second car coming out of that stable. 13 Mini Stocks were on hand and five Bandit cars also hit the track for the first time.

Besides the regular divisions that compete at Genesee weekly, several other drivers took the opportunity to shake their cars down for the season. “The Belfast Brewmaster,” Al Brewer had his sharp-looking RUSH Pro Mod on hand. Dan Craun was on hand with his CRSA 305 Sprint Car. The Livonia, NY pilot was running on average 16.02 lap times, with several laps under that time frame.

Several Modified drivers were on hand as well, getting dialed in for the 2021 edition of The Gladiator, scheduled for Thursday, July 8. Veteran Ron Cartwright plus former Genesee regulars Tony Pangrazio and John Venuto was on hand as well as young guns Robbie Johnston and Jonathan Reid. Johnston made the move up in 2020 to the Modified division and was named DIRTcar Northeast Big-Block Modified Rookie of the Year. Jonathan Reid is making the move up to the 358 Modifieds from the Sportsman. Robbie Johnston set the quick time for the division with a 17.822-second lap. The Gladiator will see some of the best Modified racers in the Northeast in competition for a lucrative payout of $5,000 winner’s share. In two previous events, the trophy made two trips to the hamlet of Ransomville. Ryan Susice won the inaugural event in 2018 and third-generation driver Erick Rudolph took the title in 2019.

60 plus cars were in attendance total on a cool Sunday afternoon. A second and final pre-season practice session is scheduled for Saturday, April 24 from 2-6 pm.

The 2021 season lid-lifter at Genesee will take place on Saturday, May 1 with the Gene Dewitt Memorial. On May 8, the Empire Super Sprints will make their highly anticipated return to Batavia. The last time the ESS ran on the 1/3rd mile oval without being co-sanctioned with another series was in 1991. In three previous events on the Genesee 1/3rd mile oval, Mike VanDusen (July 12, 1987), Johnny Brutcher (June 30, 1989), and John Birosh (July 19, 1991) all scored wins. The ESS co-promoted a show at Genesee in August of 2007 alongside the Patriot Sprint Tour and the Southern Ontario Sprints. “The Cobra” Chuck Hebing found victory lane that night. The return of the ESS to Genesee will take place on Saturday, May 8.

Genesee has a slew of other events that are highlights of the 2021 campaign. The Street Stocks will race in the Brian Ace Memorial on Saturday, May 15. Brian was a longtime competitor at Genesee who died last year. The RUSH Late Model Touring Series returns on May 29. A memorial race for young Mackenzie Kulesza will take place on Thursday, June 17. Kenzie was the daughter of racer and official Tony Kulesza who passed away following a horrific car accident late in 2020. Racing will begin at 7:00 pm that night. Fireworks will light up the sky on July 3. On July 8, the mighty Modifieds return for the Gladiator. $5,000 will await the winner in victory lane that Thursday night. The ULMS Late Models will also make their first of two scheduled appearances that evening. Saturday, July 24th will be the annual Fair Race. July 31st will see the Sportsman Super DIRTcar Series take center stage. August 14 will be the second visit of the season by the ULMS. Max Blair (2) and “Slowride” David Scott has won the three previous events. The annual Topless Weekend will see the return of the RUSH Sprints plus two separate RUSH Late Model Touring Series shows. Topless Nationals Weekend will take place September, 24 and 25. Tentatively, 20 races are scheduled at the Genesee Speedway for 2021.