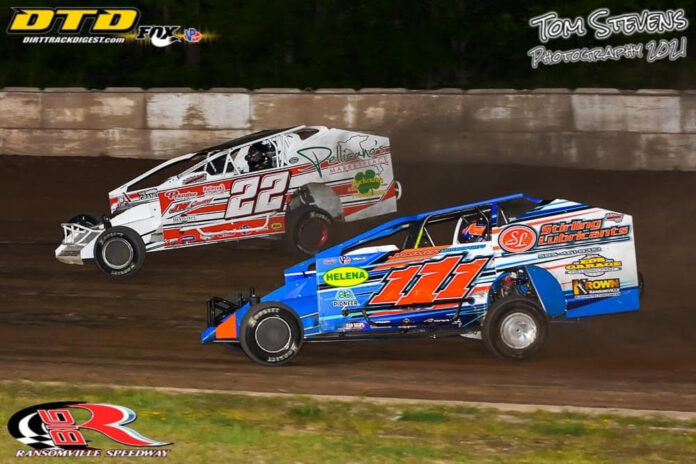 North Tonawanda, NY’s Noah Walker finally notched his first career DIRTcar Sportsman victory this past Saturday night, June 5 at Genesee Speedway. Using the top side of the 1/3rd-mile oval, Walker had to hold off divisional points leader Phil Vigneri III to pick up the victory. The previous night at Ransomville Speedway, Walker had a strong run, leading 21 laps and got passed late by eventual race winner Brett Senek.

“It feels like all the weight has finally been lifted off my shoulders,” Walker explained. “Hopefully, we’re not done yet. We have a good car right now and the hard work is paying off for sure.  We’ve been close and had so much bad luck and I let Friday slip away and I wasn’t going to let it happen on Saturday and I was able to hold off Vigneri.”

Walker began his racing career 10 years ago racing go-karts at the “Little R” at Ransomville Speedway. After four years of racing karts, Walker had the opportunity to move up into the newly formed Novice Sportsman division.

“A friend of ours (Rickey Wegner) offered to team up and let me drive the car in the novice and he would drive it in the regular Sportsman,” Walker said.

“Chad’s shop is right down the road from my house and my dad helped him back in the day and would take me over there and see them work on the car,” Walker said. “Chad has been a huge help for me and my operation over the years as far as knowledge and his guidance to help me get better.”

“Ransomville is a great racetrack that is very racey and has multiple lanes for passing and it’s just a fast track.” Genesee is known as “The Place to Race” and since I won my first race there, that place is special.”

When asked what makes the Sportsman division the toughest week in and week out, Walker explained that “the Sportsman has so many drivers on any given night have a chance of winning and that you have to be really good from when you unload the car all the way until you put it back into the trailer, hopefully, the same way that you unloaded the car.”

The future plans for Walker are to continue what he and his team are doing in the Sportsman division but his ultimate goal is to be able to get into a 358 Modified full-time within the next couple of seasons.

Walker’s number (22) has some history in Western New York racing. Walker’s grandfather worked on Billy Rafter’s famed number 22 and Walker’s dad also worked on the asphalt modified of “The Hotshoe” Chuck Hossfeld. Both Rafter and Hossfeld spent time on the dirt at Ransomville, but ultimately found success on the pavement tracks throughout the northeast, especially Lancaster Speedway (New York International Raceway Park at Lancaster Speedway & Dragway).

“Once I teamed up with Ricky Wegner, his number was 22 and that number just stuck around so I decided to run with that,” Walker said.

Walker cannot do this alone as he has a multitude of people to thank for all their support.

“I first have to start off by thanking my family, especially my dad Ron for all the hard work he puts on the car with me. My mom, sister Briana, and my brother-in-law Nick for all their support. I also must thank my girlfriend Ciara for all that she does to help whenever she can. She does a lot, and I cannot thank her enough for all her love and support. I cannot thank my crew guy Zack for all his work in the shop and at the tracks as well.”

Noah drives the Pellicano’s Marketplace, JW Services, MacKenzie’s Automotive, Premier Towing, and Recovery, Greater Niagara Mechanical, Halleen’s Automotive, ML Studios, Champion Oil, and Mr. Ventry’s Pizza on the Boulevard sponsored Bicknell with a Donath Motor Worx powerplant under the hood. Without all of our partners, none of this is possible and we really cannot thank them enough,” Walker said.

With his first victory out of the way, Walker is proving that he has the talent to park it in victory lane and that he can win against the best in the region. Look for Walker to be back in victory lane before you know it at a track near you.