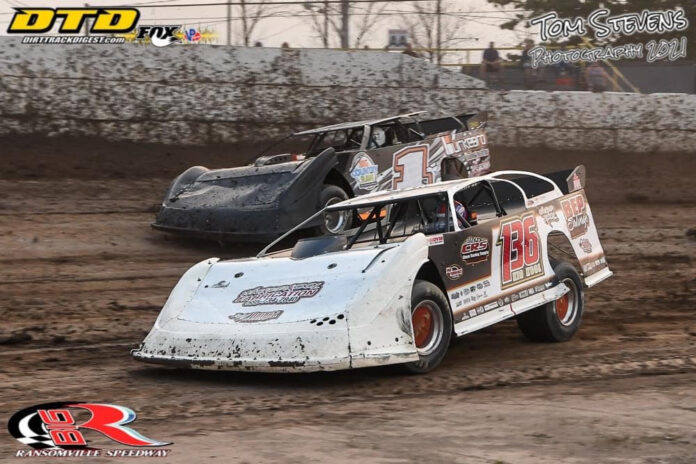 ELBA, NY –  “Kid Kool” David Pangrazio is looking to have a winning 2022 season. The third-generation driver from Elba, N.Y., is excited to get his season underway in a few short weeks.

“We are not going to commit to running anywhere weekly or following a series full-time,” Pangrazio said. “We are looking to run big money shows, and travel to different tracks.  Traveling to different tracks and going to new places helps you become a better driver, with some tracks fitting my driving style while others I have to adapt and change the way I drive or set up the car.”

When asked what type of track fits his driving style the best, “Kid Kool” stated, “give me a dry, slick track any day. Right around the bottom is where you’ll find me.”

Pangrazio is following the long lineage of family members that have spent time behind the wheel. Running the same number that his dad Scooter raced throughout his career, “Kid Kool” began racing in the Bandit division at the then-named Raceway 5 (now Genesee Speedway) in Batavia. “My first Mini Stock was an old asphalt car from the Southern Tier,” Pangrazio said. “I always wanted to race as the 136 to continue the tradition,” David continued. After successfully winning races in the 4 Cylinder ranks, he made the jump to the RUSH Crate Late Models.

David has been successful in winning races locally at Genesee Speedway, and Freedom Motorsports Park but had also scored two wins at the Humberstone Speedway in Port Colborne, Ontario, Canada, including a win in the prestigious All-Canadian Championships. “We like Humberstone, it’s close to home and the track is always very racey and everyone up there is nice and welcoming,” Pangrazio said.

The 2022 season will see the team debut a brand new XR1 Rocket.

“I cannot thank all my sponsors enough for their support of me and the race team,” Pangrazio said. “I would like to thank my parents, my girlfriend Johnae, and my sister Emma for all their help at the track.”

The team will also have a fresh motor under the hood thanks to the recipient of the 2021 Friends of Auto Racing (FOAR SCORE) Fan Club Mechanical Achievement Award Jason Ore. Teams that had a Jason Ore engine between the pipes had success in 2021, winning numerous races and track championships at tracks across Western New York and Northeast Pennsylvania.

David and his dad Scooter operate Wicked Kool Fabrication. Fabricating anything from chassis carts to custom seat mounts, body carts utilized for DIRTcar Modifieds, tire rotators, and more. Customers of their business go from the low-budget weekly racer, all the way up to some of the top teams in the Northeast. Wicked Kool Fabrication can be found on Facebook for more information.

The goals of “Kid Kool” in 2022 include keeping the car in one piece at each race, winning big money races, and getting more big checks to hang in the shop. The team hasn’t decided on when their season will begin, whether it is a trip down south in March, or waiting until the weather breaks here at home. For those interested in following “Kid Kool,” you can follow Pangrazio Racing on Facebook.