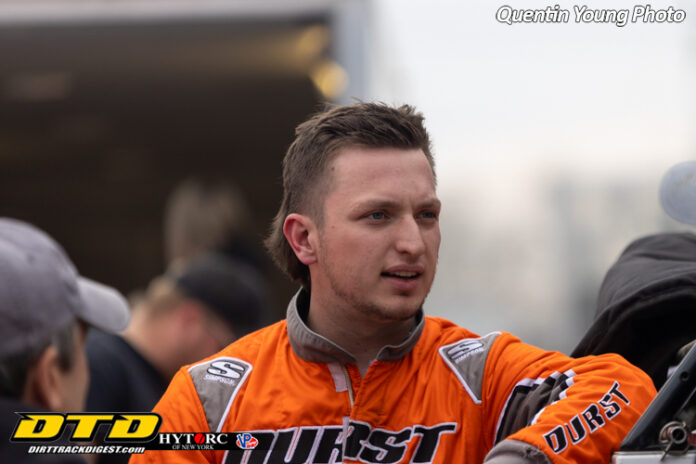 CANANDAIGUA, NY – “Mad Max” Max McLaughlin from Mooresville, NC had a moment that would fit the nickname of his legendary father, “Magic Shoes” Mike McLaughlin as Max used the outside of the track late to pick up the win in the Stars and Stripes 76 at Land of Legends Raceway Thursday night. The win for McLaughlin was his first point’s paying race on the Super DIRTcar Series and second win on the Series in 2022.

“That was a tough race,” McLaughlin explained. “I wasn’t sure if we were able to get to Justin (Haers), but we saved our tires and were able to be there at the end.” McLaughlin started sixth on the grid, as everyone was chasing Justin Haers as he redrew the pole position and would pull away from the field early on in the 76-lap event that paid $7,600 to win.

Tim Sears Jr would take over second from outside pole sitter Adam Pierson on lap three and by lap seven, Peter Britten would enter the top five. Britten’s run would come to an end on lap 16 after pulling into the infield with an issue.

Entering the night in Canandaigua, Mat Williamson was the Super DIRTcar Series points leader, however, Williamson had a night to forget as he was a lap down to the field on lap 19.

With not much changing in the running order, McLaughlin would make his mark on lap 30 after passing Matt Sheppard for fourth place. By lap 40, “Mad Max” would pass Sears for second and would begin to go after Haers for the lead. The race’s lone caution would come out on lap 45 as Alan Johnson came to a stop, in turn, one after running in the top 10 throughout the event to that point.

The restart was the turning point of the race, as McLaughlin was pressuring Haers for the lead, meanwhile, Erick Rudolph was continuing his battle with Matt Sheppard for fourth place, and Stewart Friesen racing in sixth after starting 10th on the grid. Friesen would enter the top five on lap 68, after passing Tim Sears Jr.

The move of the race happened with three laps remaining, as McLaughlin used the outside to take the lead from Haers going down the back straightaway. McLaughlin would go on to score the win over Haers, Sheppard, Rudolph, and Friesen.

Max joined his father Mike in having their first Super DIRTcar Series points-paying wins at Canandaigua. “It’s cool to get the first one that goes towards the championship and it’s special to have my dad’s number and being able to get my first win here as he did is special,” McLaughlin continued.

Runner-up finisher Justin Haers made sure that the fans in attendance along with the other competitors in the pits were taking notice, as the reigning Big Block champion at Land of Legends led the majority of the race. “ The last part of the race, I couldn’t work off the top off turn two and Max did a good job to catch us while we were in lap traffic,” Haers said. “We were here that’s for sure,” Haers continued.

After starting 11th on the grid, Matt Sheppard was able to finish the 76-lap race in third place. “There was a lot of coming and goings throughout the race with all of us having different runs at different times,” Sheppard said. “My car never fired off well after the restart and we lost a couple of spots, but we were able to get by Erick (Rudolph) and Sears and ending up third, we had a solid night,” Sheppard said.

The Super DIRTcar Series will head to Big Diamond Speedway on July 12 for the next race on the tour. The Series will return to the Finger Lakes on August 18 to wrap up the inaugural SummerFAST. 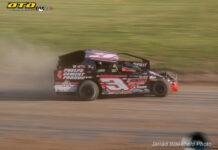