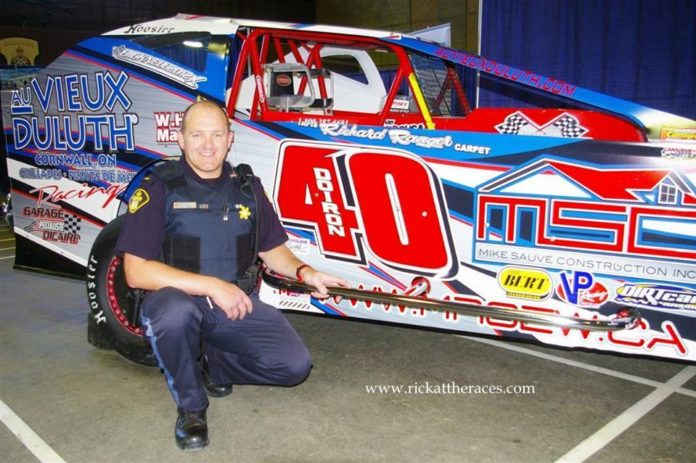 CORNWALL, ONT – The Race Director position will have a new face for the 2017 season at Cornwall Motor Speedway. Scott Hanton has recently announced that he is retiring from the racing scene. With the position being vacated, Joel Doiron has accepted to take on the responsibilities for the upcoming season.

With more than 30 years of experience in the dirt track racing world, Scott Hanton decided during the winter months that it is now time to step away from racing and move on to other projects: “I am stepping down for the Race Director role as I intend to spend more time with my family, after 30 years, it is time to step away” mentioned Hanton who was also in favour about Joel Doiron’s nomimation: “It made my decision easier knowing that Joel will take the role, it is unfortunate for him that he will not be racing but I am positive that he will do a great job!”

Hanton had a wealth of knowledge of experience in officiating dirt track racing: “I have started back in 1987 at Cornwall as assistant flagman, I then got the head flagman position during that same year and was there for 13 years, I then moved up in the tower as race coordinator and the last 7-8 years I was the race director, in the past 30 years, I only missed 3 years in Cornwall”. The Cornwall, Ontario resident also officiated at other track such as Edelweiss for 3 years in the early 2000s as well as Rolling Wheels for about 10 years both as the race director. Hanton also joined the Super DIRTcar Big Block Series Tour in 2010 and visited over 50 different tracks, being on that tour.

Hanton also mentioned that he did all the positions of officiating from head starter, pit coordinator, he even announced a race: ‘’I was a spectator that night at Frogtown (now known as Mohawk), the announcer was sick and I had to step in for that night!” The Lavergne family would like to thank Scott for all his work that he accomplished in the 30 years he has done at the speedway and wish him luck in his future projects.

With Joel Doiron stepping in the position, it will more than 30 years that the position will be occupied by a police officer, with Bob Trottier, Dennis Moquin, Hanton before Joel.

Doiron is well known as the Modified driver, former track champion and also an experienced police officer with the Ontario Provincial Police (OPP) but very few are aware that Joel has some experience in that type of position: “I was approached by the owner of Edelweiss Speedway and I was race director for a full year, it was quite interesting to see the other side of the coin, being a driver seeing thing differently but also working with a great group of people and bringing some ideas as well to make the race track successful and I think I was able to accomplish during that time”

The Alexandria Ontario resident, received a call from Raymond Lavergne concerning this job and several reasons were taken into factor for Doiron’s decision: My attachment to Cornwall, I grew up there as a kid helping my dad racing but also the Lavergne family, I have known Raymond since the teenage years seeing him at different race tracks and have the upmost respect for him as an individual but also for what he’s done in a very short period of time with the speedway, he wants to keep the track at a high level.

Doiron is looking forward to 2017 and knows he will face some challenges down the road: “I am not going there to reinvent the wheel but to incorporate myself into an already successful group of worker that makes every night successful, team work is a big thing for me, there is no ‘’I’’ in team, I want to not only maintain but help bring the track to new heights, working with drivers and fans and make it a complete package” stated Doiron

His vast experience has a spokesperson with the OPP as well as being behind a wheel of race car for numerous years will be two important assets that Doiron will be able to maximise in voicing his expectations in a clear way to drivers, employees, sponsors and race fans.

Joel will officially start his new role as a Mini-Stock drivers meeting will be held on Friday, January 27 in order to build a solid foundation and make the class grow.

An audio interview was done with Joel, you can hear it by clicking on the following link: