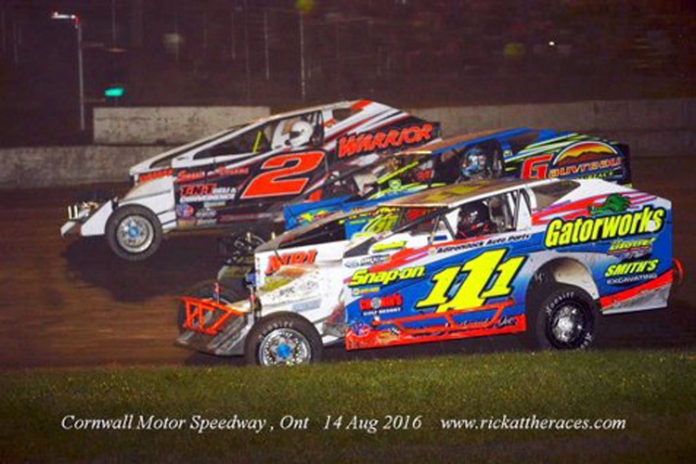 CORNWALL, ONT – Race fans and teams will now be able to fill out their Sunday evening calendars as Cornwall Motor Speedway is happy to present their 2017 race schedule. A very busy summer is planned as 20 events will fill out the months between May and September.

The season will start early in May with the Test and Tune evening scheduled for Tuesday, May 2nd. The season will start on the next Sunday, May 7th with the season opener then we are coming back for a special weekend doubleheader on May 21 and 22 involving our three local series in the Canadian Nationals Modified, Race for the Cure Sportsman and Cindy Ladouceur Memorial Mini-Stock Series as well as other visiting series and regular event making for a great Sunday evening and Monday afternoon to attend.

June will mark the attendance of a variety of racing classes starting with the Empire Super Sprints on June 4th. One of our biggest event of the season will be presented on June 18th with the return of the World of Outlaws Late Models and on June 25th, the Lightning Sprints will close out the month with their first of two visits.

The busiest month of the year will definitively be July with 5 big events; Cornwall will be celebrating the 150th anniversary of our nation at two occasions starting on July 2nd with Canada 150 night with the Ultimate Pro-Stock Series, a $2,000 to win 40-lap feature for the Modifieds and the popular autograph night. The Super DIRTcar Series Big Block tour is next on July 9th with sprint night on the 16th with the Patriot Sprints and SpeedSTR. The second round of the Race for the Cure Sportsman Series highlights July 23rd and the DIRTcar Pro-Stock Series will make a stop along with the Mod-Lite of Quebec making a stop on the 30th.


The month of August will be similar to July with 5 nights of racing with round #2 of the Canadian Nationals and the final race for the Cindy Ladouceur Memorial Series starting August on the 6th. The second event involving celebrating Canada’s 150th will be on Thursday, August 17 with a 150-lap Modified event paying a whopping $10,000 to the winner and total purse of $30,000, the Sportsman with 50-lap and Mini-Stock with a twin 15 night will also share the evening. The final event of the Race for the Cure Sportsman Series is scheduled for August 20th. The Lightning Sprints and Vintage of Eastern Ontario are also on the card during that month.

September will close out the season with the Canadian Nationals Finale with a $5,000 to win race along with the DIRTcar Sportsman Series on September 3rd and the Fireball Enduro will be the 20th and final event for this spectacular calendar.

“Our ultimate goal is to always deliver a high quality calendar for our race teams and our fans and I am confident that we achieved our goal with these 20 events that brings variety and action!” stated Public Relations Director, Martin Belanger.

2017 will mark the 4th season under the belt of the Lavergne Family: “With the return of the World of Outlaws and the 150-lap and $10,000 to win Modified event in August, the Lavergne family are always finding new ways to keep Cornwall part of the best on the DIRTcar circuit’’ added Belanger

More news and details about some of the events will be communicated in the coming weeks as the season pass sale will start really soon.