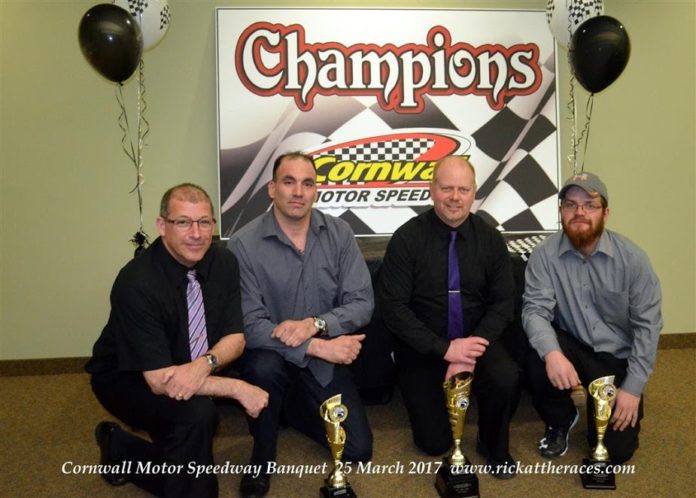 CORNWALL, ONT – Cornwall Motor Speedway celebrated their 2016 champion last evening at the South Stormont Community Centre with over 240 guests were in the room to remember the great season.

A few drivers left the banquet with a lot of hardware in their hand, Chris Raabe was one of them, winning the Modified track champion in 2016 as well as the Doiron Engineering Cup. Carey Terrance won the Canadian Nationals Series.

Shane Pecore was also rewarded for his dream season with the Sportsman track championship as well as the coveted Race for the Cure Series. Tristan Draper won the RSI Heat Championship.

In Pro-Stock, Stephane Lebrun captured a long awaited championship with George Renaud getting a second consecutive RSI Heat championship. Junior Delormier in Novice Sportsman and Bob Ray in Mini-Stock were the other track champions that received honours.


Scott Hanton received the Mitch Jock Award for his great 30-year career in officiating and implications in dirt track racing as well all his work at Cornwall Speedway. 360nitro won the Ron Morin Award for all their work in promoting the sport and the website is celebrating their 10-year anniversary this season.

Steven Quesnel, Justin Desrosiers, Derek Cryderman and Corey Wheeler were named the rookies of the year in their respective classes.

Congratulations to all the winners and looking forward to a great 2017 season!