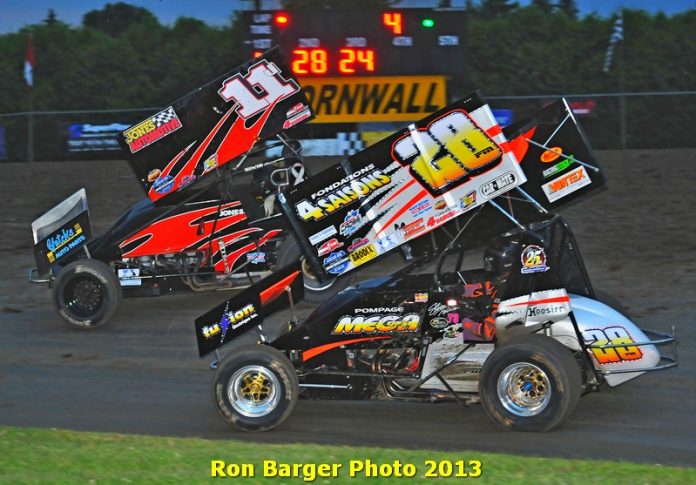 CORNWALL, ONT – Another big event is on the card for this Sunday at Cornwall Motor Speedway as the Empire Super Sprints are in town along with a complete race program in all divisions as the Mini-Stock will have a night off. This great night of racing will be presented by Collège La Cité.

Falling to rain in 2016, the Empire Super Sprints will make another attempt this coming Sunday as they will make a return after their last run made back in August 2008. Several drivers have circled down Cornwall for their lone visit in 2017. One of the favourite to see in the winner circle at the end of the 25-lap event is 3-time winner at Cornwall and defending ESS Series champion, Steve Poirier. The driver of the #28FM didn’t get the start he wanted for this season having transportation issues during the first weekend, jeopardizing his chances for another title run. Current point’s leader, Jason Barney is also one to watch; he currently has 1 win to his credit this season and his looking for that coveted title, Barney has had success also in the past at Cornwall. Both Poirier and Barney will be joined by a list of talented drivers that includes Coleman Gulick, Paul Kinney, Jeff Cook, Matt Tanner, Jonathan Preston, Dylan Westbrook and Shawn Donath. Local runner, Lee Ladouceur will also be in the field along with Matt Billings campaigning with the ESS this summer. We expect to see Quebec young guns such as Jordan Poirier, Alex Vigneault, Yan Bilodeau, Guillaume Nedeirer and Dale Gosselin.

In the Modified division, Corey Wheeler had a great run as he was able to pass Danny Johnson in the final portion of the event last Sunday evening. A solid field of 23 cars had shown up for the opener, we should see the field being in the low 20s on a regular basis. The talent pool is probably the best at Cornwall in years in the Modifieds as Danny Johnson and David Hebert are added to the regulars list. Winning the track championship this season will be quite rewarding as nearly 10 drivers has a legitimate chance of doing so. This group will be in battle for a 30-lap race.

Also on the card, will be the Tracy Wheeler Assis2Sell Sportsman division back to a regular night with a 25-lap event as well as the Alexandria Home Hardware Pro-Stock with a regular 25-lap race as well. The Novice Sportsman will also return to action with a 15-lap affair. All three classes should see great numbers in drivers.