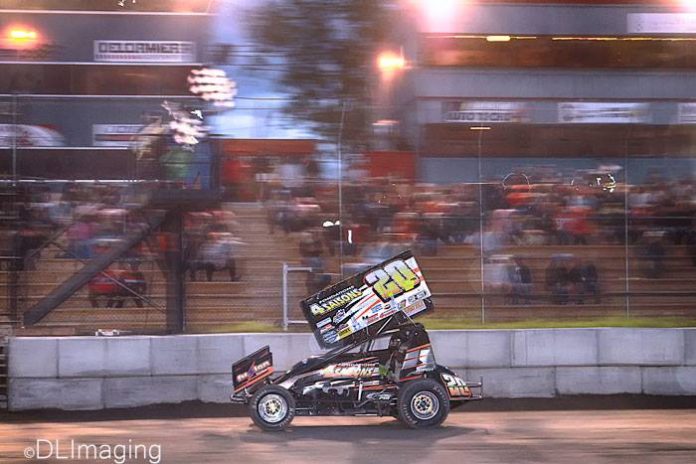 CORNWALL, ONT – Ever since 2005, the name Poirier has graced victory lane with the Lucas Oil Empire Super Sprints (ESS). Steve Poirier has 62 of them. On Sunday night at the Cornwall Motor Speedway it was Jordan Poirier’s turn as he lad all 25 laps to collect ESS career win #1.

Jordan is the nephew of Steve and to make the victory even more sweeter Steve finished second making for a special family gathering on the podium.

It was ESS’ return to the fast quarter mile in Cornwall, Ontario for the first time since 2008. The 1000 Islands RV Centre Canada Tour event was well received by the fans and competitors as a part of a three race weekend North of the Border.

Jordan took the lead right at the drop of Austin Swamp’s green flag and you knew he had a quick car. “The guys worked so hard last night and this morning after our trouble at Drummond,” said Poirier. “We as a team just didn’t give up, went to work and I had such a good car tonight.”

Poirier survived a couple of cautions and red early on, then the last 19 laps went non-stop and on the tight confines of Cornwall that’s not an easy task. “I was real good on the top but when you got to the lap cars you had to make sure you make the right decisions,” Poirier went on. “I just didn’t want to make a mistake and lose the lead. Luckily it all worked out an I got the win.”

Poirier has many wins in the Quebec Mini-Sprint Series but his first in ESS competition will be special. “I am so happy, to win with ESS you just don’t know how much this means to me,” the happy winner went on, “Then to have Steve finish behind me makes this a night to remember. I just want to thank everyone.”

For Steve Poirier it was an unusual night that saw him actually running in the dash which gave him the 14th place starting position. “With the track being a little tricky an having lots of bite, I was thinking where I was starting I was just going to take it easy,” said the seven-time champion, “But, when I started the race this was the first time this year I had a car that I thought was fast, so I raced hard.”

Poirier picked off cars at a rapid rate and was in the top five on that lap six restart which was the last of the race. He made quick moves and all of a sudden he was in second chasing is team car.

“When I got to second I could see Jordan and thought maybe with the traffic I could close in. But, he was fast, real fast,” Poirier continued on the races’ closing stages. “I normally don’t like to finish second but on this night to see Jordan win makes it a cool night for all of us. He tries hard and tonight it he finally got the win, I’m very happy for him.”

For the defending champ, it’s been a different season. “We were trying for another championship but with our troubles at Outlaw and then our hauler breaking down for Fulton we just decided that not this year,” Poirier went on, “We started some big projects at work so we have to focus on that also. We are getting everything closer now so you will definitely see me more. It’s just a different year for sure for all of us.”

Alain Bergeron made it an all Quebec podium with a solid third place finish over Mitch Brown and Brett Wright for his second top five on the weekend. Rounding out the top ten were point leader Jason Barney, Paul Kinney, Yan Bilodeau, Lee Ladouceur and Dan Douville.