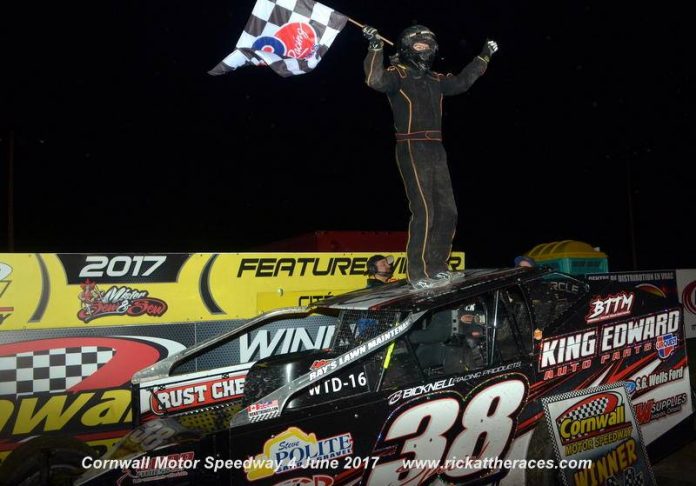 CORNWALL, ONT – The Empire Super Sprints were in town for their first visit since 2008 along with a full program for all division as the Mini-Stock had a night off. This great program was sponsored by College La Cité.

In the 25-lap Empire Super Sprints feature, Paulie Colagiovanni brought the red on the initial start, he gets out without any injuries. On the restart, Jordan Poirier took the lead over Jake Brown as Vigneault took third, unfortunately for him, he hit the wall hard in the backstretch ending his night. Two more laps were done in the feature when Coleman Gullick and Chris Jones get together. Jordan Poirer pulls away from the rest of the field as his uncle takes second with Alain Bergeron completes the top 3. Jordan Poirier gets his first career win in the ESS.

Luke Whitteker led the way in the 30-lap Modified feature, only 1 lap was done as Brian McDonald went off the speedway in turn 3. Whitteker to the lead with Gabriel Richer joining the top 3 but got passed by Mario Clair. While leader had a good lead over the field, Clair passed Therrien for second with 14 laps to go. Whitteker went on to win his first event of the season over Clair and Chris Raabe.

CD Beauchamp had a quick start in the 25-lap Alexandria Home Hardware Pro-Stock, Kody Kelly was quick on the outside lane with Kevin Fetterly moving to second with Beauchamp fading to third. Caution was out on lap 5 for Roch Aubin stopping in turn 2. On the restart, Fetterly was strong and took the lead over Kelly; Fetterly had to resist of several charges in the final portion from Dave Bissonnette and George Renaud, who made their way up to the top 3. Fetterly captures win #1 of 2017.

The final feature of the evening saw the 25-lap Tracy Wheeler Assist2Sell Sportsman as Cedric Gauvreau was the early leader over Ricky Thompson and Adam Rozon. Gauvreau led the first 5 laps as he got passed by Thompson. Martin Hebert was strong on the inside and passed Gauvreau for second. Hebert got closer to Thompson with 10 laps in the books. Derek Cryderman rapidly joined the lead pack as he charged for the lead just before a caution on lap 14. Starting in 15th, Shane Pecore joined the leaders running in second with Cryderman on the lead. Cryderman led the final portion to win the event.
In the 12-lap Novice Sportsman Polar Sound DJ Services, Kurtis Cayer took the lead over Rosco Garreau and Dudes Thompson. Cayer led the whole feature and won his first win in the division.

A busy Sunday is on the schedule next week as the Cindy Ladouceur Memorial Series for Mini-Stocks will start the evening along with the Street-Stock and a full night of racing in the other divisions.