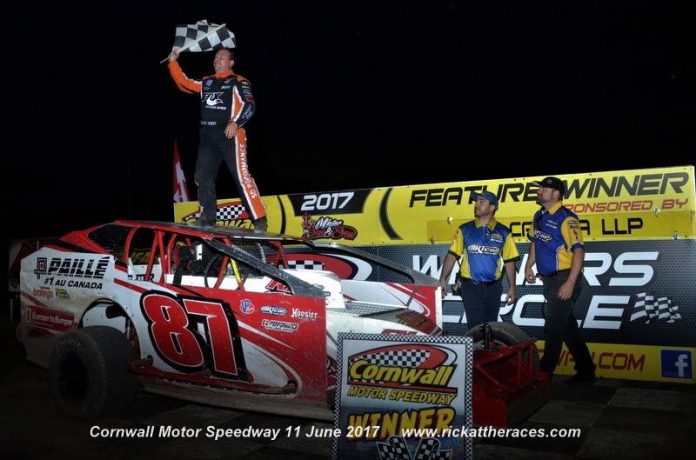 categories as Mother Nature finally cooperated with a beautiful and warm Sunday.

lead over Marc Dagenais. Potvin to the lead with the father and son duo of Terry and

Skylar Ladouceur behind Potvin. Alexis Charbonneau made his way to second and was

challenging Potvin for the lead. Potvin led the entire feature and captured his first event

JF Corriveau took the lead in the 30-lap Modified event, as David Hebert moved up to

second spot. Caution came out on lap 6 for Brian McDonald. Hebert made a great move

Corriveau for second. Luke Whitteker made some noise for his 8 th starting spot moving

up to third. The yellow lights came out with 4 laps to go. Hebert was able to resist to a

late charge from Luke Whitteker and went on to win his first of the season, becoming the

feature. Delormier led the first laps as Steve Morris made a move to pass Delormier for

the lead with Tristan Draper joining him in second at the halfway point. Both drivers

got his first feature of the season.

Roch Aubin was in front in the 25-lap Home Hardware Alexandria Pro-Stock feature,

while Aubin was leading Kevin Fetterly went up to second with Ghislain Valade. Aubin

led up until lap 19 as he went too high and Valade passed him, Aubin faded to fourth

spot. Valade led all the remaining laps and captured win #1 of the season.

second with Tyler Bushey in third. While Ramsay was alone in front the battle was on for

second as Bushey had to go to the pits. Nicolas Gauvreau was now running in second.

Sportsman feature. Thompson spun out giving the lead to Kurtis Cayer, he went on to

win his second feature in a row.

event over Francis Desjardins and Dustin Bode. Gaucher never looked back and went on

to capture the feature event.

Models Series will be in town after a few years absence.

For more information on the upcoming season at Cornwall, please visit the website at

these two Medias for results and contests over the summer.