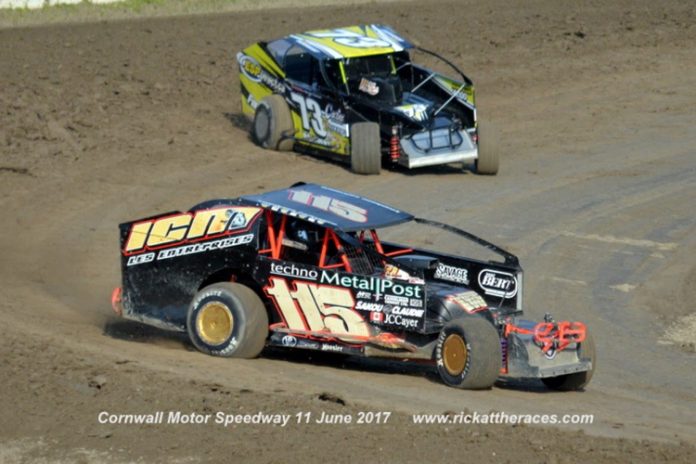 CORNWALL, ONT – Mother Nature only brought 1 positive thing so far, as all the rainout has produce a great event for this coming Sunday evening at Cornwall Motor Speedway with a tripleheader in local series, the Street-Stock and Sportsman on Alexandria Home Hardware night!

There will be no better place to celebrate Canada’s 150th anniversary than Cornwall this coming Sunday as we will present the remake of round 1 of the Canadian Nationals Modified Series with a 125-lap Modified event, on May 21, a total of 28 drivers had shown and since qualifying was not completed, special procedures were implemented for this event to have a full 30-car starting grid as interest has been shown by several drivers in participating in this event.

Also on the card, will be the Ultimate Pro-Stock Series with a 50-lap feature, a good group of Granby regulars including Stephane Lemire, Steve Chaput, Guy Viens, Bruno Cyr, Dany Voghel and Jocelyn Chicoine have confirmed their presence at for the first race as more drivers could be added to an already stout field!

Added this morning by promoter Raymond Lavergne to the schedule will be the remake of round 2 of the Cindy Ladouceur-Danny Lefebvre Memorial Series with a 25-lap feature, a field near to 20 cars is expected.

The Street-Stock with a 25-lap race will also be part of the action along with the Sportsman Tracy Wheeler Assis2Sell with 25-lap. A total of 250 laps of feature racing will be done over the night as more than 100 cars are expected in the pits being a long weekend.