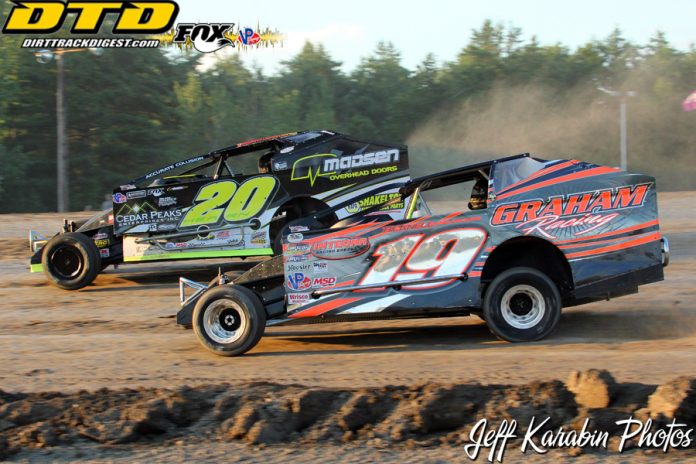 CORNWALL, ONT – The wait is finally over as the Super DIRTcar Big Block Series will hit Cornwall Motor Speedway this coming Sunday evening on Les Entreprises ICM night along with a full show for the Sportsman, Novice Sportsman and double duty for the Mini-Stock.

The stars and cars of the Super DIRTcar Series will be in attendance this Sunday for the 100-lap event, the current championship battle is really tight as the top 10 drivers are still in the hunt for the championship with Billy Decker, Stewart Friesen, Brett Hearn, Larry Wight, Jimmy Phelps, Pat Ward, Tim Fuller, Max McLaughlin and Alan Johnson right in the mix. Other Series regulars such as Keith Flach, Billy Whittaker, Peter Britten, Mike Mahaney, Brand Walters and Rich Scagliotta will be joining the group.

We can expect other well-known drivers that will have a big block powered machine for this event as Steve Bernard, Yan Bussiere, JF Corriveau, Carey Terrance and Mike Maresca will be in attendance as well. Current high point man at Cornwall, Chris Raabe will be in battle with his 358 along with Luke Whitteker, Corey Wheeler, Danny Johnson, Joey Ladouceur, Gage Morin, David Hebert, Mario Clair, Lance Willix, Mathieu Boisvert, Brian Mc Donald, Louie Jackson, Gabriel Richer, Kayle Robidoux and many more as we should have between 35 and 40 cars in attendance.

The battle is on as well in the Tracy Wheeler Assist2Sell Sportsman division as a 3-way fight is shaping up between Shane Pecore, Justin Lalancette and Tristan Draper as only 11 points separates the top 3 drivers. Always competitive and having high car counts on a weekly basis, we expect to see another great 25-lap event on Sunday.


The Mini-Stock class will have a busy evening as they will start with the remake of the Cindy Ladouceur-Danny Lefebvre Memorial 25-lap feature and then run their regular heat races and 15-lap feature that will conclude the evening. The Polar Sound DJ Service Novice Sportsman division will have a regular 15-lap feature as well.

The pit gates will open at 2pm with a cost of $45 and the general admission will open their doors at 3:30pm with a cost of $35 for adults, $18 for Seniors and 5$ for kids 16 years old and under. Super DIRTcar Series time trials are set for 5:45pm followed by the 25-lap Mini-Stock feature remake and then heat races starting at 6:30pm.

For more information on the upcoming season at Cornwall, please visit the website at www.cornwallspeedway.com you can add us on Facebook at www.facebook.com/cornwallspeedway or on twitter at @cms_speedway, we will use these two Medias for results and contests over the summer.