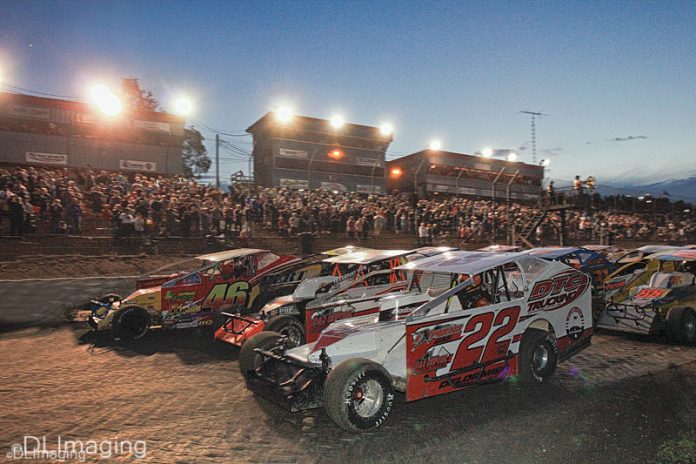 CORNWALL, ONT – It will be another busy evening this coming Sunday at Cornwall Motor Speedway with 6 classes on the schedule for a total of 7 features! On tap, the Patriot Sprints, double feature for the Mini-Stock plus a full program! Lamoureux Pumping will be the sponsor of the evening.

Another strong group of Sprint Car should assemble at Cornwall for the 30-lap Patriot Sprint Tour feature, still holding the record for the fastest lap for a 360 powered machine at the track, Jared ‘’the Juice’’ Zimbardi leads the way in the points race for this tour over Steve Collins, Kyke Drum, Jordan Thomas and Joe Trenca, we expect to see some familiar names such as the Poirier family joining the group as Steve won their last event at Albany-Saratoga, we also expect to see Lee Ladouceur in his familiar #51. Several drivers from the Oshweken area are expected to make the haul as well, as Dylan Westbrook is the high point man on the Canadian tour so far.

With the inclement weather being a factor in 2017, we will be in our fourth attempt to complete the second round of the Cindy Ladouceur Memorial Series that will also be combined with the Danny Lefebvre Memorial, the 25-lap event will start the evening with the feature scheduled to be run at 6:15pm sharp! The Polar Sound DJ Services Mini-Stock will then have their regular evening with heats and a 15-lap event later on during the evening.

Because of all the losses calendar wise so far, promoter Raymond Lavergne decided to add the Modified division to Sunday’s event, they will run a 30-lap regular event, the Tracy Wheeler Assist2Sell Sportsman, Alexandria Home Hardware Pro-Stock and Polar Sound DJ Services Novice Sportsman will also have regular feature for a total of 6 divisions and 7 features.

For more information on the upcoming season at Cornwall, please visit the website at www.cornwallspeedway.com you can add us on Facebook at www.facebook.com/cornwallspeedway or on twitter at @cms_speedway, we will use these two Medias for results and contests over the summer.