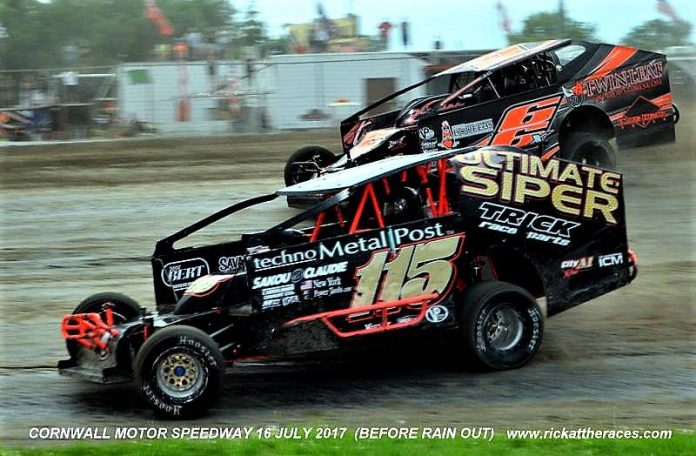 Cornwall, On– Martin Bélanger – A very busy evening was on tap at Cornwall Motor Speedway with the Patriot Sprint Tour, a full show in all division plus the remake of the Cindy Ladouceur-Danny Lefebvre Memorial on Lamoureux Pumping night.

The Cindy Ladouceur Memorial-Danny Lefebvre started the evening as Tyler French took the early lead over Karl Potvin and Marc Dagenais. A good battle occurred for second between Potvin and Dagenais as Dylan Kirkland brought the caution on lap 13.

On a restart, Dagenais powered by French for the lead as Joe McNicholls was now in third. A good battle for first as McNicholls joined Dagenais for the lead as Patrice Moniere rolled over in turn 2 and red was out with 1 lap to go. McNicholls led the final lap and captured the win, his first of the season at Cornwall.

The 30-lap Patriot Sprint Tour saw Dylan Westbrook took the early lead with Steve Poirier in second and Mitch Brown in third. Westbrook went into lap traffic with 10 laps in the books. Westbrook still in the lead with Poirier making a great move on lap 22 to pass Westbrook with Jared Zimbardi in third. Poirier led the final laps to win the Patriot Tour with Westbrook and Zimbardi completing the top 3.

The rain came in as we prepared the Modified feature, we had to pull the plug for the rest of the evening. We will announce in the next few days, the remake dates.


Another big event next week as the second round of the Race for the Cure Sportsman feature event along with a complete show plus the autograph night.