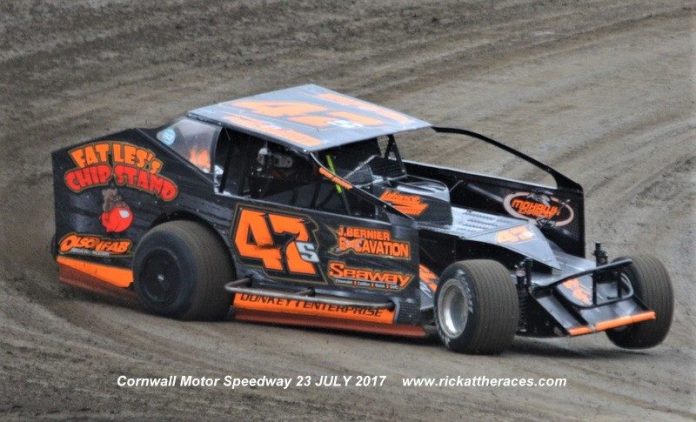 CORNWALL, ON – Martin Bélanger – Another great night of racing was on the card this Sunday at Cornwall Motor Speedway as the second of round of the Race for the Cure Sportsman Series was run along with a complete show plus remake features for Pro-Stock and Mini-Stock and the always popular autograph session. This evening was sponsored by Seaway GM.

Tristan Draper got the early lead in the 100-lap Race for the Cure Sportsman as Brianna
Ladouceur was challenging for the lead, she was able to get the lead over Draper as her
faded to fourth with Robert Delormier and Thomas Cook passing him. Ladouceur in lap
traffic by lap 13 as Felix Murray brought the caution out 3 laps later. On the restart,
Shane Pecore was on the move as he made his way to front passing Ladouceur on lap 25
to take the lead. Draper was back in the mix as he got by Ladouceur for second on lap 42
and closed in on Pecore. Started back in 22 nd , Martin Pelletier was now in the top 5
challenging for third by the halfway point. A lap 60 restart, saw Pecore lead the way over
Pelletier and Draper. The leaders got into lap traffic with 20 to go as Draper went too
high in turn 3 and lost his third causing the yellow. The final laps were quite exciting as
Pelletier tried everything to pass Pecore but was not able to do it as Pecore collected the
win over Pelletier and Ladouceur.


Louie Jackson got the lead in the 30-lap Modified feature with Tim O’Brien in battle with
him, as Gage Morin and Corey Wheeler made their way to the top as they challenged the
leader by lap 10. A lap 16 restart, saw David Hebert having a great jump and moved to
third. Just like in the Sportsman, the final laps were a barnburner as Hebert and Wheeler
challenged for the lead running side by side as Wheeler had the best getting a second
feature this season.


Dave Seguin led the way in the 25-lap Alexandria Home Hardware with CD Beauchamp
running in second with Roch Aubin in third. Beauchamp was able to pass Seguin for first
as caution was out on lap 11. Beauchamp never looked back as the battle was for second
between Seguin and Marc Lalonde. Beauchamp went on to win his first feature of the
season over Lalonde and Seguin

The night started with the remake 15-lap feature for the Mini-Stock as Alexis
Charbonneau dominated the event capturing the win, several position changes at the back
of Charbonneau as Francis Desjardins and Steve Morin completed the podium.
Dave Seguin and CD Beauchamp moved away from the field in the early stage of the
Alexandria Home Hardware Pro-Stock feature event from last Sunday. A lap 10 restart,
saw Seguin staying in front with Beauchamp still on his back bumper with a good battle


for third with Marc Lalonde getting the position. On the restart on lap 16, both leaders got
tangled together as Marc Lalonde your new leader. Rock Aubin made a great return
taking the lead and became the fifth different driver to win in the Pro-Stock ranks.
The Polar Sound DJ Services Mini-Stock saw Mike Gaucher becoming the first driver to
win 2 features in the division in 2017 after a great side by side battle with Alexis
Charbonneau.

Another great show next Sunday as the DIRTcar Pro-Stock Series will be in town along
with remake features for the Modified and Sportsman plus a complete program.
For more information on the upcoming season at Cornwall, please visit the website at
www.cornwallspeedway.com you can add us on Facebook at
www.facebook.com/cornwallspeedway or on twitter at @cornwalspeedway, we will use
these two Medias for results and contests over the summer.