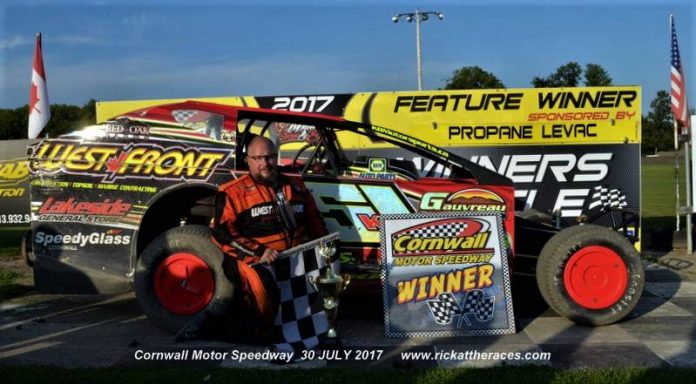 CORNWALL, ONT – Another great night of racing was on the card this Sunday at Cornwall Motor Speedway as the DIRTcar Pro-Stock Series will be in town along with the Quebec Mod-Lite, a complete program for Modified and Sportsman as both classes will also have remake features from July 16, Propane Levac was presenting this evening of action.

Jocelyn Roy led the field of 23 cars to the green as a great battle for second formed up as Dave Bissonnette had the best over Dan Older with CD Beauchamp and Stephane Lebrun. Battle shaped up as Older took the lead on lap 5. Bissonnette slowed down on lap 8 and caution was out losing his great position. On the restart, CD Beauchamp jumped to the lead with Stephane Lebrun and Rob Yetman moving up to third. As the race quickly reached the halfway point, the top 3 remained the same with Older and George Renaud completing the top 5.Beauchamp built himself a good lead over the field as a good battle was shaping up for second between Yetman and Lebrun. Yetman used the inside lane and got second with 15 laps to go as he started to pull away from Lebrun. Pascal Payeur brought the caution on lap 38.On the following green, Yetman was able to pass Beauchamp for the lead as Kevin Fetterly slowed the field on the next lap. Nobody had anything for Yetman in the last 10 laps as went to win a third race on the DIRTcar Pro-Stock Series in 2017 over Beauchamp and Lebrun who completed the podium.

In the 30-lap Modified feature, Gage Morin quickly made his way to the front as Joey Ladouceur was able to keep second until lap 9 when Danny Johnson surprised him from the inside lane and took Ladouceur’s position after starting in 11th, Chris Raabe followed Johnson and took third with Ladouceur fading to fourth. On a lap 11 restart, Morin remained first as Johnson and Raabe put on a show by trading the second spot for two laps with Whitteker slowing down. Morin had a great ride and kept the lead but Johnson was still close to Morin as Raabe had to resist at charges from Hebert. A lap 27 caution brought the field together. An exciting finish as Morin and Johnson fought for the lead as Morin came on top to capture win #1 this season.

The July 16 Modified feature saw David Papineau taking the early lead over Brian McDonald who quickly moved up to second. Papineau until halfway point when McDonald was able to pass him, Papineau quickly faded in the as Kayle Robidoux moved up to second and challenged McDonald for the lead, Robidoux was able to pass McDonald on lap 19 and led for three laps until he had issues with his machine. McDonald was back in the lead and never looked back to win his first of the season over Luke Whitteker and David Hebert who completed the podium.


In the 25-lap Sportsman remake from 2 weeks ago, Scott McGill was the early leader and led the first 3 circuits when Thomas Cook went to the lead, Cook had a strong run resisting charges from Tristan Draper in the first portion then Delbert Legrow but Cook went on to lead the final portion and captured win #1 of the season in the Sportsman.

The Tracy Wheeler Assist2Sell Sportsman feature completed the night as Scott McGill had a great start over Adam Rozon and Billy Cook. The first 11 laps went on quickly as Dave Rogers and Kurtis Cayer got tangled together in the backstretch and yellow was out. On the restart, Adam Rozon got the lead over McGill with Emmanuel St-Denis now in third. St-Denis went too high and lost several position as Thomas Cook was now up to second and Derek Cryderman in third. Rozon went on to lead the final laps to win his first career feature at Cornwall over Cryderman and Robert Delormier.

In the 20-lap Mod-Lite feature, Jeff May took the early lead over Stephane Bernier and Alysson Prince. While May was alone in front, Michael Forcier took second from Bernier as he faded to fourth with Prince taking third spot at the halfway point. The red flag was out as Martin Fleurent rolled over in the backstretch on that same lap. On the restart, May kept the top spot with Harley Brown on the move making his way to third spot. Brown went off the speedway and lost his great spot as yellow came out with 5 laps left. May dominated the event and won the event over Michael Forcier and Benjamin Cartier completed the top 3.

Another great event next Sunday evening as the Canadian Nationals Modified Series will have it’s second round along with the final race of the Cindy Ladouceur Memorial Series and a complete race program.