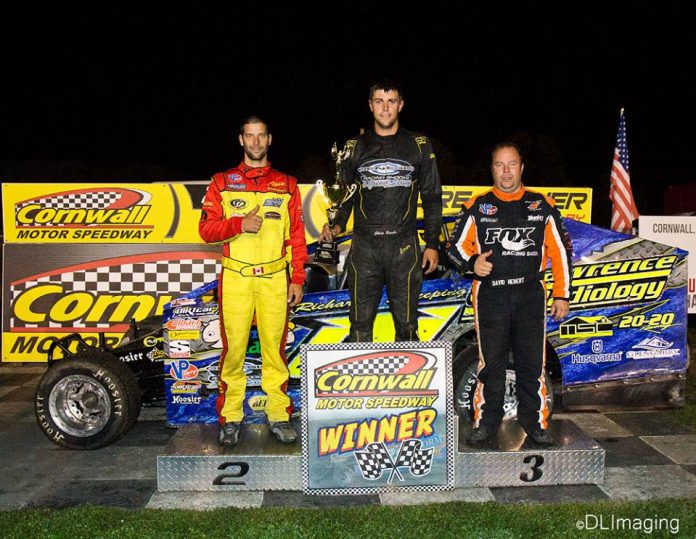 CORNWALL, ONT – Cornwall Motor Speedway kicked-off a busy month of August in a great way tonight as the second round of the Canadian Nationals Modified Series and the final race of the Cindy Ladouceur Memorial Mini-Stock Series were presented along with a complete program on West Front Construction Night.

Francois Bernier took the lead in the 125-lap Canadian Nationals Modified Series over Bobby Herrington and Kayle Robidoux as they quickly got into lap traffic. Herrington was able to pass Bernier on lap 11 in these conditions as caution was out. On the restart, Herrington still the leader with Jordan McCreadie to the second spot with Bernier still in third. A lot of shuffle in the top spot on lap 45 as Bobby Herrington and Luke Whitteker headed to the pits for mechanical issues, McCreadie was the new leader with Robidoux and Chris Raabe your new top 3 with 50 laps in the books. As the leaders were in lap traffic Robidoux was able to get to the lead on lap 61 with Mario Clair and Danny Johnson now in the top 5. Laps clicked off on the feature as Danny Johnson rolled over in the backstretch on lap 84 and red was out. On the following green, Raabe took the lead over Robidoux with David Hebert now in third after starting 29th. Raabe got a few challenges from Robidoux in the last portion but resisted to the challenges as he collected a second win in a row in the Series over Robidoux and Hebert collecting the top 3.

In the 25-lap Assist2Sell Tracy Wheeler Sportsman feature David Rogers took the lead. Rogers in control over Steve Morris and Emmanuel St-Denis. Rogers pulled away as Shane Pecore made his way to the front taking fourth on lap 8 after starting in 14th. Rogers got into lap traffic with less than 10 to go with Morris trying to close the gap. Rogers led all 25 laps to capture his first win at Cornwall over Morris and Pecore.

A few position swaps in the first laps in the Alexandria Home Hardware Pro-Stock as Dave Bissonnette took the lead over Kevin Fetterly and George Renaud. Bissonnette was strong in front but slowed down on lap 15 and gave the lead to Renaud. On the restart, Jeffrey Lapalme surprised Renaud for the lead but Renaud was to the lead on two laps later. Renaud led the final laps and become the first to win 2 features in the Pro-Stocks this season.


The Cindy Ladouceur Memorial Series was first on the speedway as Karl Potvin was the early leader over Richard Thornton as Marc Dagenais made his way to the front of the field. A lap 12 restart saw Dagenais powered by Potvin for the lead. Dagenais never looked back and went to win over Potvin and Thornton. With his win, Dagenais was crowned the champion over Tyler French and Mike Gaucher. Dagenais also won the special Dash for Cash.

Action continues next Sunday evening as all division will have a regular night in preparation for the big event scheduled on Thursday, August 17 with the Modified having a 150-lap event paying $10,000 to win, 50 laps for the Sportsman and twin 15s for the Mini-Stocks.