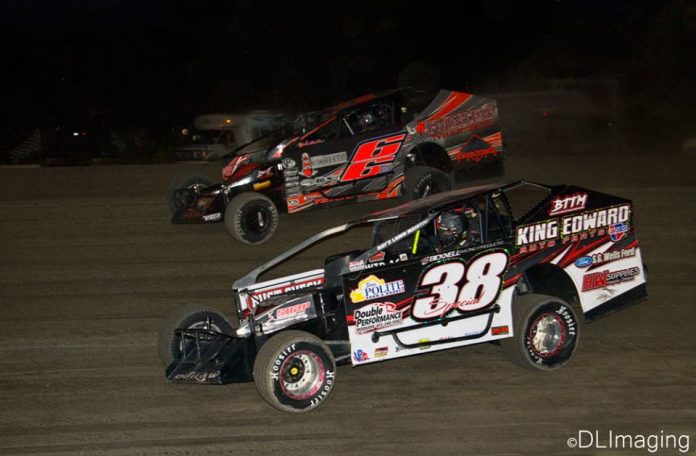 CORNWALL, ONT – A beautiful night for racing at Cornwall Motor Speedway as the Lightning Sprints were in town for their annual visit along with a complete race program on Rutters Elevators and Pioneer Hi-Bred.

J-F Corriveau led the initial lap in the 30-lap Modified race when Brian McDonald had a flat and yellow lights were out. Corriveau was back in the lead as Luke Whitteker ran second and Carey Terrance in third. Corriveau held strong in front but Whitteker found something on the inside lane and passed him on lap 13. Caution was out on lap 24 for Dany Gagne. Whitteker led the final laps to win his second feature this season over Terrance and Corriveau.

The Alexandria Home Hardware Pro-Stock feature saw Dave Seguin taking the lead as Stephane Lebrun moved up to second as Jeffrey Lapalme was running in third. Roch Aubin brought caution on lap 8. Seguin remained in the lead as CD Beauchamp was in the mix taking second spot and charging for the lead. Seguin resisted to charges of Beauchamp with Lebrun still in sight. Seguin pulled away but Beauchamp made his way back and won a photo finish over Seguin and Lebrun in third.

The Assist2Sell Sportsman Feature was the final event of the evening with rookie of Kurtis Cayer in command over Scott McGill and Junior Delormier. Cayer in front with David Rogers on the move taking up second spot and closed the gap with Cayer with Brianna Ladouceur having a strong car as well. Cayer led the final laps and got his first feature in the Sportsman over Ladouceur who came home in second over Rogers.


The 25-lap Lightning Sprints feature saw Yannick Poirier taking the early lead, the laps went down quickly as Eric Mireault was chasing Poirier around the bullring, on lap 20, Mireault took the high lane and passed Poirier outside turn 4 when Benoit Lafleur caught on fire and red flag was out on that same lap. Mireault led the final laps to win the feature event

The Polar Sound DJ Services Mini-Stock feature was the first to hit the speedway with a 15-lap event. Dylan Kirkland was the early leader with Alexis Charbonneau and Marc Dagenais running in the top 3. Charbonneau took away the lead from Kirkland on lap 3. Charbonneau was quick as Dagenais joined him in second as Brent Merkley brought the caution on lap 10. On the restart, a hard hit for Mike Gaucher ended his night. Dagenais was strong on the next green and never looked back to capture his second in a row and third of the year.

The biggest show of the 2017 season is at our doorstep as the O’Canada 150 will be presented this Thursday, August 17 with a 150-lap event for the 358 Modifieds with the winner getting $10,000 plus a 50-lap feature for the Sportsman and twin 15s for the Mini-Stocks.