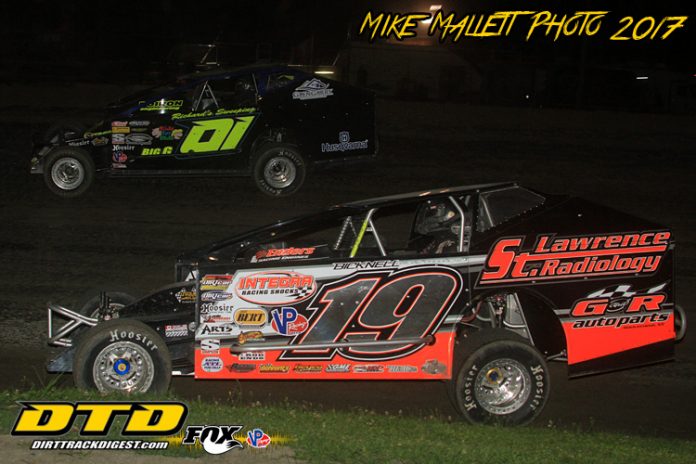 CORNWALL, ONT – 33 DIRTcar legal 358-Modifieds qualified for the $30,000 plus purse for the O’Canada 150. A packed Cornwall Speedway provided some thrilling and relentless racing action for 150-laps on the tiny bull ring.

Steve Bernier took the lead from the drop of the green and set sail on the 150-lap voyage in the hopes of capturing the big $10,000 payday at the end of the night. With just nine of the 150 on the board, Bernier was into slower traffic and was being hounded by the No. 46 of Kyle Robidoux.

With 32 laps on the counter Robidoux overtook Bernier at the starter’s stand for the lead. The lead was short lived as Bernier was able to retake the lead before the conclusion of the next lap. The leaders were in ultra heavy traffic all while the green was out. Sheer racing madness was underway throughout the field.

Robidoux would retake the lead on lap 39 and hold that position for a mere nine laps while Chris Raabe was cutting his way through the field. With 48 down, Raabe would take control of the lead.


The first caution came out after a staggering 63 consecutive laps of racing. While under yellow, Brett Hearn was given the “lucky dog” and was able to join the tail of the field.

Caution flags were counting until lap 100 as the drivers spoke during the pre-race meeting that they were concerned with fuel.

When the field went back to green on lap 75, it was time for Raabe to take a turn at the lead as he overtook Bernier for the lead.

As the laps counted down towards 100, the intensity was ratcheting up. On lap 86 a multi-car battle for second was under way with all of the competitors either nose to tail or just within distance enough that a blanket would cover them all. It was Bernier and Steve Bernard going toe to toe in the hopes they could reel in Raabe at the front end.

Bernard would dispose of Bernier and with 94 laps in, Bernard was catching Raabe in fierce lap traffic. Bernier’s momentum was broken as the second caution of the night came on lap 96.

A heroic effort on a slick track was being put in by Drummond and Granby regular campaigner David Hebert who started 24th on the grid and was running 10th. He would end up 11th at the end of the night.

As the field went back to work at lap 100, Raabe once again bolted out to the lead but he would soon have a lot of company to handle. Once again as what happened earlier in the race, a multi-car battle erupted for second. This time it was Carey Terrance, Fuller and Bernard.

As Raabe hit lap traffic again on lap 116, Bernard had his hands full with Fuller for second. 10 laps later, Bernard was caught after having severe pressure applied to him by the veteran of the Super DIRTcar Series. Just two laps later Fuller passed Bernard for second and was closing the gap on Raabe for the lead.

A small bobble coming out of turn two may have cost Raabe the race win. As he bobbled out of turn two, Fuller pounced and took the race lead and never looked back over the rest of the 22 laps of the 150 lap event.

“I didn’t have nearly enough motor at the beginning of the night,” said Fuller. “Once the track blew off and slowed up a bit there between laps 120-130 it played right into our hands. If this had been a 100-lap event we wouldn’t be talking right now. I’d be a fifth place or so car.

“I was so busy there those last 20 or 30 laps between Danny (Johnson) and Brett (Hearn) and the lapped cars. I was just trying to keep the car straight, bide my time and wait for the race to come to us, but Raabe was the class of the field here tonight.”

Fuller used a W16 engine for his win aboard his St Lawrence Radiology. It marked the fifth small-block win for Fuller this year. He has four at Mohawk International Raceway where he’s a regular on Friday nights, but this was Fuller’s biggest payday yet this year in a Modified.

Second place finisher Raabe didn’t sound so happy to finish second after leading so many laps.

“We had a fairly good car. Those last 50 laps hurt us. It really slickened off. We’re just scraping by this year so were just trying to finish up the year.”

“We changed gears before the heat race and we were good for the feature. We had no tire wear, the car was good but when it got so slick there at the end the car kind of went away.”

Rounding out the top five were Terrance and Kyle Dingwall.

Bernard is on the fence about running Super DIRT Week at Oswego but may enter the World Finals in Charlotte.

“We run 16 tire facilities and own a Michelin tire retreader. That helps pay the bills so we can race.”…

“The Dr” Danny Johnson didn’t have the finish he had hoped for. He ended up a distant 15th. Johnson politely declined to be interviewed…

Hearn was piloting a second car out of the Michael Parent stable. Hearn was never a factor in the race finishing a disappointing 13th on the night.

“We were good before the feature and then somewhere it all went south. We changed tires at lap 100 to try and make something happen and we passed a few cars but not the outcome we were expecting,” said Hearn.