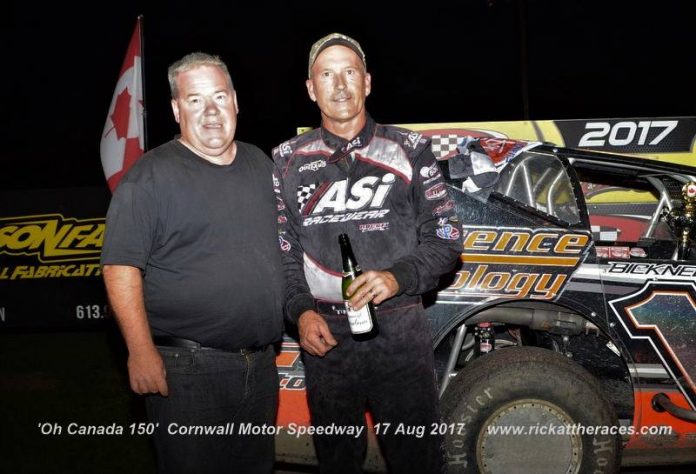 CORNWALL, ONT – It is now time for our biggest event of the year! The O’Canada 150 ran tonight with a 150-lap feature event for the Modified with $10,000 to win, a 50-lap race for our Sportsman and twin 15s for the Mini-Stock on St-Lawrence Radiology night. The O’Canada 150 saw Steve Bernier taking the lead over Kayle Robidoux and Chris Herbison. Bernier was the leader while Chris Raabe made his way to the lead pack taking second from Robidoux on lap 24. Raabe started to challenge the lead as Robidoux was found something on top and took the lead on lap 32 with Bernier and Raabe your top 3 with Herbison and Kyle Dingwall the front five at that point. Raabe made a great move and took the lead from Bernier on lap 48. The first caution came on lap 62. Action started back at halfway point with Raabe in the lead with Bernier and Robidoux the top 3. A lot of action in front as Steve Bernard made his way to the front after starting in 14th, he used the inside lane to pass Robidoux and Bernier on lap 88. Raabe in front as Carey Terrance was in the top lane making his way also in the front 3 as JF Corriveau brought the caution on lap 99. Raabe still on top with Bernard and Terrance following the leader with Tim Fuller making his way to fourth. A good battle for second for several laps between Bernard and Terrance with Fuller following closely. Raabe pulled away but lost some ground as Fuller was on the backbumper of Raabe. Fuller took the inside lane and passed Raabe for the lead on lap 130 with Bernard still third. Fuller led the final laps to capture the $10,000 to win over Raabe and Bernard completing the top 3.

Patrick Picotin took the early lead in the 50-lap Assist2Sell Sportsman as Martin Pelletier and Fred Gamache the top 3. Pelletier had a strong ride and took the lead on lap 7 over Picotin. Pelletier led the way on a lap 9 restart as Picotin was running besides him for a few laps with 14 laps in the books. Rain started to fall down and track became too slippery. The final 36 laps will be completed on August 27.


A very busy program this coming Sunday as the final race of the Race for the Cure Sportsman feature will be run with a 100-lap event, a complete race program is also on the card as SpeedSTR, Slignshot and Mini-Modified will be on the speedway making for a 7 class night.