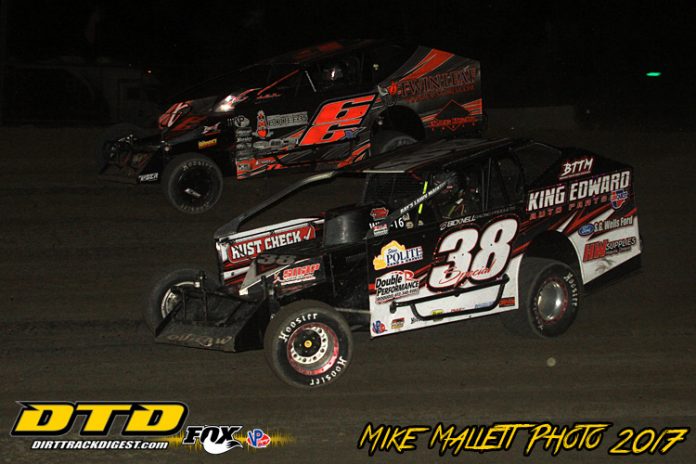 CORNWALL, ONT – It will be a very busy Sunday evening at Cornwall Motor Speedway, with a total of 7 classes on the program that will be headlined by the final round of the Race for the Cure Sportsman Series, a full show in the other regular divisions plus the remake visits of the SpeedSTR, Slingshots and Quebec Mini-Mod. Rutters Elevators will be sponsoring this occupied night!

The third and final round of the Race for the Cure will highlight Sunday night’s program with a 100-lap event, with the recent penalty awarded due to post race inspection, there was some reshuffling in the points chase as Johnaton Ferguson is now the new leader with a 20-point lead over Justin Lalancette. The points are really close between second and seventh spot as only 18 points separates Lalancette, Ryan Stabler, Brianna Ladouceur, Robert Delormier, Martin Pelletier and Alex Lajoie. Using the 100-point structure, these 7 drivers are still in contention for the coveted title.

Fellow competitor Steve Morris of TAS Racing is heavily involved in this series as he sponsoring $6,000 in cash money that will be given to the top 3 on Sunday evening; some drivers mentioned in the list could leave Cornwall with pockets full of money! Again, we are expecting a great field of cars as we had 42 and 36 cars in the first two events. Morris will also bring some car parts from the Race for the Cure Sportsman as they will be made available for the 50/50 draw along with 2018 Cornwall Speedway season pass, plus the drivers will walk in the grandstand to collect funds, all monies gathered will be added to the nearly $2,000 already collected.

Three different series from Quebec will also be in attendance as the SpeedSTR and SlingShot along with the Quebec Mini-Modified will be running; between 15 and 22 cars are expected in each division.


Along with the 4 divisions mentioned, the Modifieds with 30 laps, Pro-Stock with 25 and Mini-Stock with 15 are also on the card. Chris Raabe continue to expand his lead in the Modified as George Renaud holds the reign in Pro-Stock while Marc Dagenais made his way up to the top in tying Mike Gaucher for points going into Sunday.

For this coming Sunday, the pit gates will open at 3 pm with a cost of $30 and the general admission will open their doors at 4:30pm with a cost of $20 for adults, $8 for seniors and $2 for kids 16 years old and under. Qualifying races are scheduled to start early than normal at 6:00pm