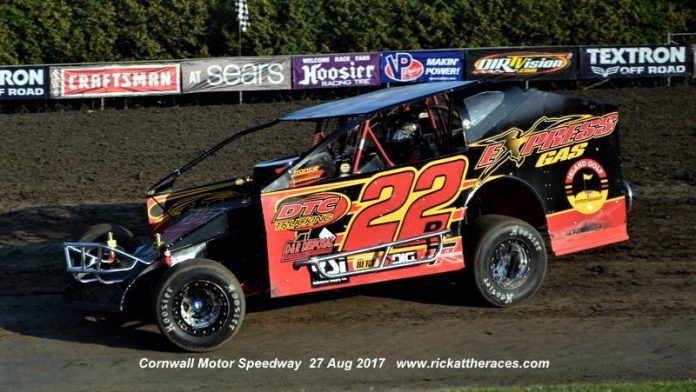 Cornwall, Ont  – Martin Bélanger – The end of the 2017 season is already upon us at Cornwall Motor Speedway with only 2 weeks of regular season left, the Sportsman had a busy Sunday as they started the evening with the final 36 laps of the August 17 feature plus being part of the complete race program as the Eastern Ontario Vintage Club will also be in town on Jim’s Performance Plus night.

In the 30-lap Modified feature, Danny Johnson to the lead with Gage Morin and Marc
Therrien in third. Johnson kept his distance from Morin with Brian McDonald. Johnson
had a strong car tonight surviving two cautions in the event and captured his first win of
the season as Chris Raabe made his way up to second, Raabe seals up the 2017 Modified
title.

Kevin Fetterly was the early leader in the Alexandria Home Hardware Pro-Stock feature.
Real exciting racing in the first portion of the 25-lap as several drivers taking the lead
with Dave Bissonnette by lap 10. Starting in 7 th spot, CD Beauchamp made his way to the
top as he challenged Bissonnette and took the lead on lap 16. Beauchamp lead the way as
Stephane Lebrun now in third. Beauchamp had a strong finish and got his third of the
night over Bissonnette.


Steve Morris to the lead in the 25-lap Assist2Sell Sportsman feature as Justin Lalancette
was now in second. Lalancette was on the backbumper of Morris. Morris held his way in
front as David Rogers was making noise from his 11 th starting spot. Rogers took the lead
on lap 17 and never looked back and got win #2 of the season over Lalancette.

The evening started with the remake 36-lap Sportsman feature from August 17 with
Patrick Picotin taking the lead over the field as current point’s leader Justin Lalancette
had a flat tire early on. On the restart, Picotin still in the lead as Tristan Draper took
second over Martin Pelletier on lap 20. Picotin tried to hold off Draper but the #17 car
was too strong on the top side and took the lead, Draper led the final portion and captured
his third feature of season.

The Polar Sound DJ Services saw an accident occurring on the first lap and yellow is out.
Mike Gaucher was the leader followed by Dylan Kirkland and Francis Desjardins.
Current point’s leader, Marc Dagenais made his way to the front and took third. Gaucher
led the final laps and won his third of the season.

For more information on the upcoming season at Cornwall, please visit the website at
www.cornwallspeedway.com you can add us on Facebook at
www.facebook.com/cornwallspeedway or on twitter at @cornwalspeedway, we will use
these two Medias for results and contests over the summer. 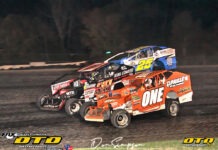