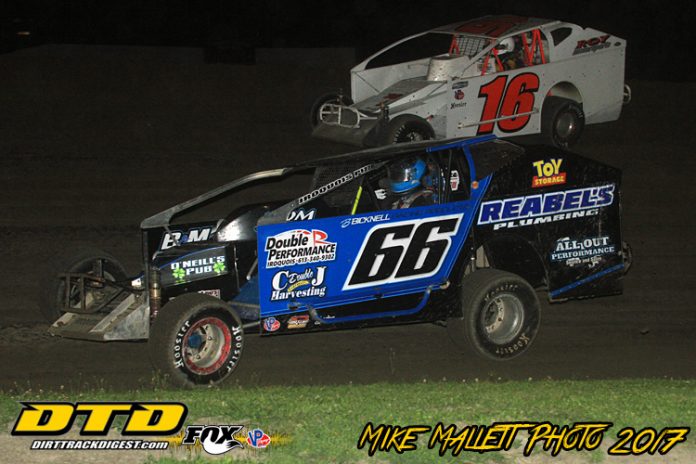 CORNWALL, ONT – The 2017 regular season will end in fashion at Cornwall Motor Speedway as the final round of the Canadian Nationals Modified Series will be run combined with the 2nd leg of the DIRTcar 358-Modified Series, the DIRTcar Sportsman will also be in attendance as the Pro-Stock and Mini-Stock will have a regular night to cap off the regular season points championship.

By finishing second in Sunday’s Modified feature event, Chris Raabe has already secured the 2017 track title in the premier division, Raabe scores a second title in a row, and he will enter Sunday’s program with the coveted Canadian Nationals title on his mind, the driver of the 01-machine has a 37-point lead over Jordan McCreadie, he will also look to sweep the whole deal having won the first two races of the Series. Another strong group of invaders will be in town for the $5,000 to win event. Again 125 laps are schedule for this race that will also be combined with the DIRTcar 358-Modified Series; the initial round at Granby gathered a great field of 42 competitors, similar numbers are in the horizons for Sunday as well. Again a 10-minute pit stop will be done at the completion of lap 75 to give more to the fans as well.

The 50-lap DIRTcar Sportsman Series feature race will be fun to watch as the track championship battle is shaping up to a great finish as Justin Lalancette holds a thin 15-point lead over Tristan Draper coming in the final regular season event this coming Sunday. Just to add to the challenge, having the DIRTcar Series in town will bring several invaders for round two of the North section of the series. Numbers in high 30s/low 40s are expected for this race.

In the Alexandria Home Hardware Pro-Stock, George Renaud saw his point’s lead melt down to 18 points over CD Beauchamp, who just captured his third win of the season last Sunday evening. We will follow closely how Renaud and Beauchamp will race on the track during the 25-lap event.


The championship run that will be the most exciting will certainly be the Polar Sound DJ Services Mini-Stock feature with only 1 point separating Marc Dagenais and Mike Gaucher. Both drivers have been in a heated battle in the last few weeks which they will bring everything to the table during the 15-lap event as both drivers are looking for a first title in the division.