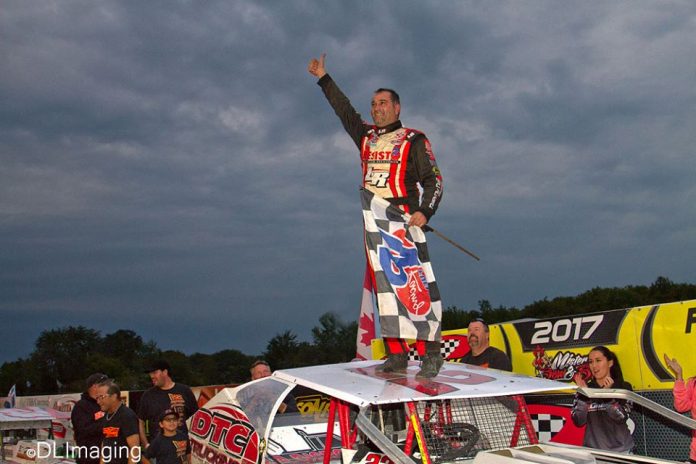 CORNWALL, ONT – The 2017 regular season ended in fashion at Cornwall Motor Speedway as the final round of the Canadian Nationals Modified Series was run combined with the 2nd leg of the DIRTcar 358-Modified Series, the DIRTcar Sportsman was also be in attendance as the Pro-Stock and Mini-Stock will have a regular night to cap off the regular season points championship.

Alex Therrien and David Hebert were on the front row of the 125-lap DIRTcar 358 Series and Canadian Nationals Series. Hebert came to a stop on the initial lap and headed to the pits slowing the field down. Therrien still the lead with Jordan McCreadie and Steve Bernier running in third. Bernier lost his third on lap 13 as he spun in turn 2. Therrien still leading the way as Luke Whitteker moved up to second spot and McCreadie in third. The leaders got into heavy traffic by lap 28 as the leaders gathered all together. Danny Johnson was on the move as he found something on top as he passed the top 3 in the span of 3 laps and took the lead on lap 34. Johnson and Therrien swapped the lead for a few laps as Johnson had the best, Whitteker made a good move to pass Therrien for third. A lap 52 saw Whitteker charging Johnson for the lead, the leader went a little too high on lap 56 and Whitteker was back in the lead, caution was out on lap 60, officials deemed that Whitteker was a little aggressive on the pass and was pushed to fourth with Mario Clair the new race leader. Clair was in control at lap 75 when the 10-minute mandatory pit stop occurred.

The race started back with Luke Whitteker taking the lead and current points leader in the Canadian Nationals in Chris Raabe moving up to third. A good battle for the lead between Whitteker and Clair as both drivers exchanging the lead for several laps with Raabe still strong in third, Kayle Robidoux and Steve Bernard forming the top 5 by lap 90. Robidoux was on the move as he passed Raabe for third on lap 92. Robidoux was trying to pass Clair as Raabe had issues with his car and brought caution on lap 100, he was able to rejoin at the back of the field. Whitteker gave out the lead on lap 103 as he slowed to the infield with Kayle Robidoux the new leader, Bobby Herrington making his way to second and Steve Bernard in third. While battling for a position in the top 10, Kevin Hamel and Tim O’Brien got together sending O’Brien airborne and red flag was out on lap 104. Robidoux had a dancing partner in Bernard as he gained the lead on lap 109. Bernard led until lap 124 as Mario Clair surprised him in the final turn to capture the win over Bernard while Hamel made his way up to a podium finish after starting in 29th!

Justin Lalancette jumped to the lead in the DIRTcar Sportsman Series as Kurtis Cayer was chasing him with Brianna Ladouceur in third as the first 10 laps were done in quick fashion as Jarret Herbison slowed the field down at that occasion. Lalancette stayed in first with Tristan Draper making up to fourth and challenging Ladouceur for third. Lalancette had a strong ride and made good moves in traffic. A big accident occurred on lap 27 involving several cars in the front stretch. Rain picked up at that same occasion and because of the track conditions the race was rendered official with Lalancette picking up his first tour race in his career and securing his first Cornwall track title at the same occasion with Cayer and Ladouceur completing the top 3.

The Polar Sound DJ Services Mini-Stock feature saw Karl Potvin taking the lead as Alexis Charbonneau and Marc Dagenais were behind him, current point leader Dagenais took second. Charbonneau was holding off charges from Potvin. Charbonneau led the final laps of a feature that was slowed down by several cautions to get his second win of the season, Marc Dagenais was crowned the 2017 track champion!

A decision will be taken concerning the remake of the 25-lap Pro-Stock feature race as we invite everyone to next weeks event with the Fireball Enduro, schedule to start at 2pm on Sunday, September 10.