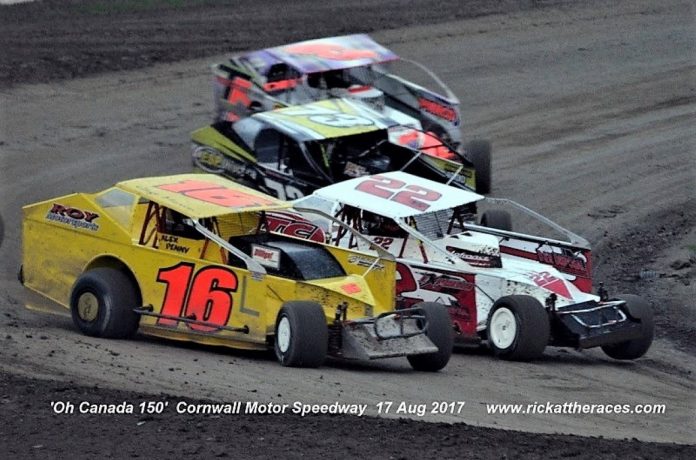 CORNWALL, ONT – The Cornwall Motor Speedway will present one of the biggest event of the season on Thursday, July 12 with the Race for the Cure 150, a 150-lap Modified feature along with Sportsman and Eastern Ontario Vintage Club. With great support of 2 sponsors, this event will be even more spectacular.

With the success of O’Canada 150 last season with over 40 modifieds and 30 sportsmans in the pits, it was clear that the event would back this summer. With the support of Michael Maresca of St.Lawrence Radiology and Steve Morris of TAS Racing, the Race for the Cure 150 will come to life in July as an addition to the already successful Race for the Cure foundation and Sportsman Series active for the last 2 years.

A lot of money will be on the line for this race as the winner will get $12,000, the biggest amount offered throughout Ontario and Quebec in 2018! With support from Maresca and Morris, drivers that will qualify for the feature will be able to collect a minimum of $500. At the demand of the sponsor, this amount could be reduced if officials are judging that a driver is doing a ‘’start and park’’ manoeuver, more clarifications will be given as we approach the event. This will also be the initial race in the North portion of the DIRTcar 358-Modified Series.

Also part of money given, the quickest time in time trials will receive $200, hard charger and hard luck awards at $200 each will also be offered. Halfway leader will also receive $200 and a contest involving the fans, for the best appearing Modified on that evening will provide $200 to the winner. A total of $1,000 added to the total purse will mean that roughly $40,000 in total purse and bonuses will be given for the Modifieds.

Along with the Race for the Cure 150, the Sportsman will also share the spotlight with a 50-lap event, last season more than 30 competitors had gathered in the pits to race. The Eastern Ontario Vintage Club will be part of the action as well. A rain date of Thursday, August 23 has been established as well.


The second edition of the event combined to the Race for the Cure foundation will make this race bigger and better!