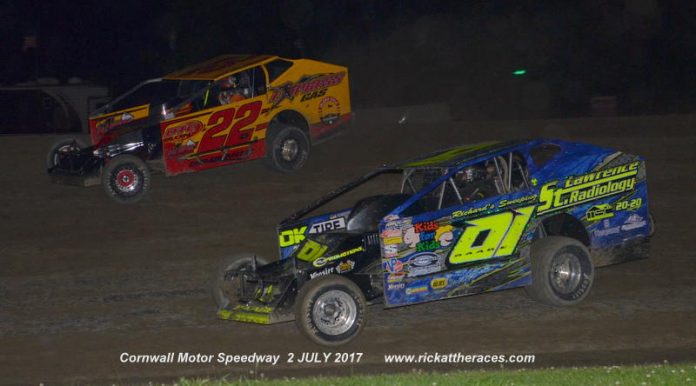 CORNWALL, ONT – With 10 days left before the start of the 2018 season, it is now time to preview our main class, the Polar Sound DJ Services division, the top 10 finish will look totally different than 2017 as we will have a few drivers that will not be committed to run Cornwall on a regular basis, the field is still be very competitive along with the rookie of the year race being very interesting.

Chris Raabe: It will be hard to bet against the 01 car again in 2018, he had a dominant season last year capturing all three championships at the speedway a finishing with an 86-point lead over the second place car. Raabe already showed his colors earlier this season by winning the season opener at Airborne Speedway in front of a solid field.

Mario Clair: He is joining forces with the Daoust family this season as they are offering a ride to ‘’Super Mario’’. A former track champion at Cornwall, he knows what it takes to get the coveted crown. He finished fifth last season in the championship, should be able to make his way into the top 3.

Corey Wheeler: Wheeler has been improving every season and we should be able to see the 47S machine in the front runners at many occasions throughout the season.

Brian McDonald: Veteran runner, he had a good season last year; McDonald is looking forward to this year as he should be in the mix as well again for the championship.


Joey Ladouceur: Will run the family ride again this season with Lee running the #23 car at Mohawk, the Ladouceur team always bring a quality ride at the speedway every season.

Carey Terrance: Depending on his busy schedule, he might miss a few programs, he is always a threat every night the 66X is in the pits.

Louie Jackson Jr. He will be in his second complete season in the 358 ranks, he is well-positioned to crack the top 10 this season after finishing 13th in his rookie campaign.

Kayle Robidoux: Another driver that could make to some noise, always fast at Cornwall, if bad luck can go way, Robidoux will be in contention again.

Other drivers to watch this season will be Tim O’Brien, Marc Therrien, David Papineau and Michael Labrèche. Former track champion, Kyle Dingwall might be back as a regular as well, he would be in the talks for a strong top 5 finish as well.

Year 2018 will be one of the good years in the rookie of the year title hunt as three drivers will be in contention for the title, Dany Gagne is making the move from Sportsman to Modifieds and have committed on being a regular this season, Gagne won all three track championships last season in Quebec. Joining Gagné, will be teammates Steve Morris and Tyler Givogue, both drivers will have brand new Bicknell machines to start the summer. While Morris has had some great outings in the Sportsman, Tyler Givogue should be considered as the favourite along with Gagne for this title, both drivers could also end in the top 10 in the championship in September.

Another competitive season in the making for the Polar Sound DJ Services Modifieds!