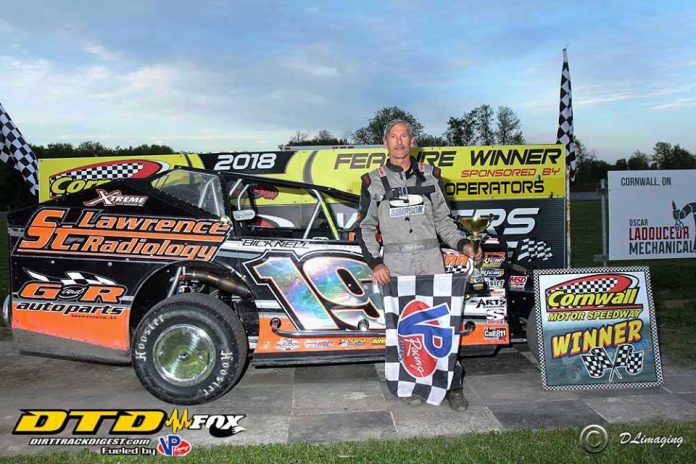 CORNWALL, ONT – Another great day for racing at Cornwall Motor Speedway as the track hosted the initial round of the Race for the Cure Sportsman Series along with a 40-lap Modified event, the Eastern Ontario Vintage Club and the Mini-Stock on the Co-Operators sponsored night.

In the special 40-lap Polar Sound DJ Services Modified feature, invader Tim Fuller grabbed the lead with Carey Terrance taking second over Chris Raabe as the first 13 laps were done quickly. On the restart. Terrance used the top side and got by Fuller in front of the flag stand on lap 16. At halfway point, Terrance was first with Fuller and Raabe running in third. Lap traffic was a factor for the leaders as Fuller was on the back bumper of Terrance, he used a lap car to slip by Terrance on lap 30 as Raabe was in the mix in the last few laps. Fuller resisted and captured the feature, his first at Cornwall and 4th of the season on the DIRTcar circuit. Shane Pecore wasted no time and took the lead on the initial green of the 100-lap Race for the Cure Sportsman feature over Gabriel Cyr and James Friesen. With 5 laps in, Tristan Draper found something on the top side and moved up to second spot with Cyr still in third. Pecore caught heavy traffic on lap 15 as he moved away from the rest of the field. Martin Pelletier made his way to the top 3 with 20 laps completed. The first 29 laps were run on green conditions when Cedric Gauvreau and Gabriel Cyr got together in turn 3. The race resumed on lap 40, Pecore remained in the lead but Draper remained close to the leader. At the halfway point, Pecore in front of Draper, Pelletier, Johnathon Ferguson and Friesen the top 5 at that point. While Pecore moved away from the field, Pelletier and Draper had a good battle for second with 57 laps completed with Pelletier having the edge. Heavy traffic was a factor as the leaders got close together with Pelletier on the bumper of Pecore with Ferguson now running in third. Ferguson was on the charge and took second of Pelletier on lap 77. Pecore kept his distance from the rest of the field being meticulous in the traffic as the laps clicked down. The final laps were spectacular as Pecore and Ferguson raced hard and got together, with Pecore remaining in the lead until the end. When the race was over, race director penalized Pecore to third giving the win to Martin Pelletier with Ferguson finishing second

The Tracy Wheeler Assist2Sell Mini-Stock had a 15-lap feature event. Marc Dagenais had the strongest car of the field as he took the lead and never looked back and went on to capture his first feature race of the season over Karl Potvin and Skylar Ladouceur.


Action continues next Sunday evening with a regular program in all divisions.